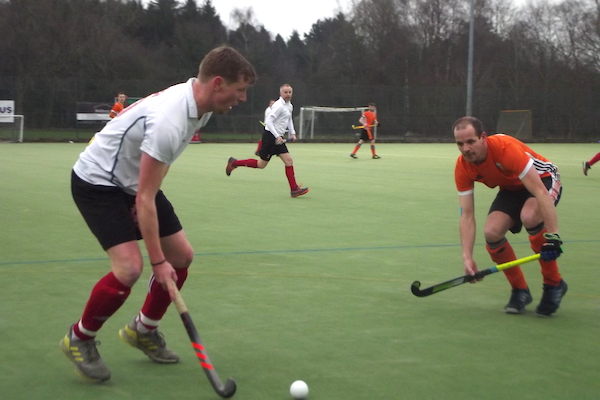 The Tangerines were almost back to full strength for their first league match of the new year against the visiting Teessiders, with skipper Ben James making a welcome return to defence.

Wilmslow pressed from the start and indeed had most of the play in the first half. Joe Booth was in particularly lively form causing Stockton problems from a number of positions.

From one of his attacks, Ben Jones opened the scoring with a neat reverse stick effort.

Wilmslow showed a weakness in conceding penalty corners and the visitors equalised from one after a couple of shots had been parried.

The home side continued to press and just before half time Pete Hallinan made it 2-1 from a penalty corner.

The second half became a dour affair with Wilmslow failing to turn their possession and attacking moves into goals.

Just as it appeared that they had ground out their first win of the year their old failing of conceding corners gave Stockton a chance which they took take a point.

The Men’s 3s proved far too strong for Eirias 3s and beat the Colwyn Bay side,10-0.

For the first half hour of the match Wilmslow camped out in the Crewe half of the pitch, but even Carla Botha’s aggressive dribbling could not get past the visiting keeper.

As sometimes happens with such a pattern of play, a Crewe breakaway resulted in the opening score.

The Tangerines continued with game plan and eventually Honey Dickinson struck to level the scores.

Soon after a Charlie Platts attack sent the ball past the goalie and an athletic diving deflection by Danni Harvey made it 2-1.

The second half proceeded with more of the same but it took some skilful attacking play by Carla Botha and a far post deflection by Lynsey Rachubka to put the result beyond doubt.

Wilmslow are still three points clear at the top of the table but not much is being given away by the chasing pack.

Wilmslow Ladies’ 2s had a record win, 15-0 away to Bebington 1s. This moves them to second place, level on points with Neston.

The Ladies’ 3s were disappointed to go down 1-2 at home to a young Deeside Ramblers 3s.

The 4s fared slightly better with a 0-0 draw away to Deeside 4s but the 5s gave the Bebington ladies some consolation by going down 1-4 to their second string.