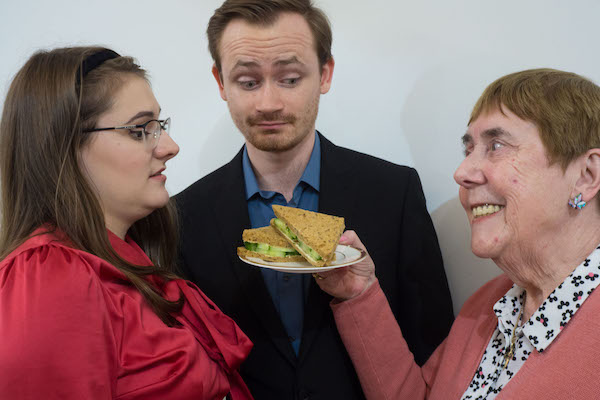 Wilmslow Guild Players’ next production is the light-hearted comedy ‘Lunch with Mrs Baskin’ by Sam Bobrick.

The show runs from 31st October to 3rd November at Wilmslow Guild, the adult education centre on Bourne Street.

The play focuses on Mrs Eva Baskin, a retired widow who continuously sets up appointments with salespeople solely to have lunch and conversation with them in her home.

Although neither has the slightest intention of getting personally involved, Mrs Baskin has other plans!

The play is being directed by Mandy Hill, a new member of Wilmslow Guild Players.

“I was asked by Wilmslow Guild Players to direct a play and after reading about four pages of this one I was chuckling to myself and thought what great content and dry humoured wit!

“It is so entertaining,” commented Mandy.

Mandy says she also likes the fact that the play has such a likeable and appealing storyline that would be enjoyed by many people.

“Basically the play is about bringing a new sense of direction to each of the characters’ lives,” she continued.

“Mrs Baskin wants to not feel so lonely. She is in search of company and needs to fill a void in her socially lost world.

“She thinks by having a ready supply of cucumber sandwiches she can cajole her new found business acquaintances and friends into staying longer and forming new friendships.

“Mrs Baskin is definitely my favourite character. I admire her for her clever sense of survival and finding solutions to her loneliness.

“I think she is brave, funny and endearing. Underneath she has a very selfless nature and wants to bring happiness to others and of course for them to enjoy her favourite sandwiches!”

The play is being staged in-the-round.

“We love the flexibility that we have in the Guild Theatre,” said committee member Bill Beton.

“It allows us to move the layout of the seating to suit the play. In this one the audience will be on all sides, which gives a great relationship between the cast and the audience.”

Mandy added: “I want to ensure that the audience all have value for money and I am therefore very conscious of the fact that everyone must have a good viewing experience.

“I try hard to ensure that the cast will distribute the right energy and level of performance for the audience to respond well – it is most important to me not to ‘short change’ the audience.”

Lunch with Mrs Baskin is a funny, heart-warming play with some very likeable characters which will make you appreciate the best of human nature.

It runs from 31st October to 3rd November at Wilmslow Guild on Bourne Street.

Tickets cost £8 (£6 on Wednesday) and can be booked online at www.wgp.org.uk (there are no booking fees for booking online).

Alternatively tickets can be booked by calling 01625 520 126 or emailing tickets@wgp.org.uk.

You can also find Wilmslow Guild Players on Facebook and Twitter – details are on the web site.