‘The Royal City of Chester’ 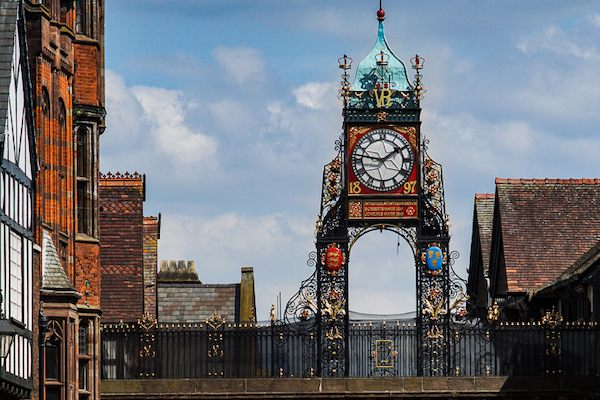 A local businessman has put forward a suggestion that our city should be given a royal honour, in the same style as other localities such as Royal Leamington Spa and Royal Tunbridge Wells.

Wootton Basset, in Wiltshire, is in fact the first town in more than 100 years to have been given a ‘royal’ title.

It was awarded the honour in 2011, following an announcement by the then prime minister David Cameron, to recognise its role in showing respect to repatriated service personnel who died in Iraq and Afghanistan.

The practice of townsfolk lining the streets as a mark of respect when dead soldiers were driven through the town – after being repatriated at the nearby RAF Lyneham – started spontaneously, and Mr Cameron said the royal tribute was a symbol of the nation’s gratitude to locals.

Chester’s Adam Dandy believes our walled city has an untapped and remarkable history that is being left forgotten, and that a royal title might help to bring it back to the fore.

He posted on social media today that Chester “should be renamed The Royal City of Chester given what sacrifices where [sic] made here.”

He said: “If you think about how the [people of the] city fought and ultimately in many cases gave all they had [including] their lives to protect the Royalists and King Charles… it absolutely should be renamed The Royal City of Chester.”

Mr Dandy suggests that the most appropriate timing for such a renaming could be when the current Earl of Chester – Prince Charles – is crowned king.

Adam said: “To coincide with the Earl of Chester’s coronation, it would be seen as a nice gesture to the city, and its Royalist history.

“It’d also be a fantastic way to promote and highlight that part of the city’s history.”

The Siege of Chester

Chester, like nearby Nantwich, had an important role in the English Civil War.

Unlike Nantwich, however, Chester does relatively little to mark this time in its history.

The Siege of Chester lasted from February 1645 until January 1646 (with an intermission during the summer of 1645).

From the beginning of the English Civil War, the city was held by forces loyal to King Charles.

At the Battle of Rowton Heath in September 1645, King Charles himself failed to lift the siege – in what was a significant setback for the Royalists.

Throughout the Siege of Chester, the city’s garrison was commanded by Lord Byron who defended the city against considerable odds.

Locals may raise a smile when they learn that a certain Colonel Michael Jones was a cavalry leader at the time (sharing, of course, a name with our modern day former council leader!)

In September 1645, the Parliamentarian Michael Jones helped storm the suburbs of Chester, and just six days later he helped his side to victory at the Battle of Rowton Heath.

How does a town get a ‘royal’ title?

The reigning monarch decides whether or not to bestow the honour of a royal title on a town (or city).

Requests are made for various reasons – and cities, towns, boroughs and hospitals can apply. Businesses can as well, but there are restrictions.

Royal Leamington Spa and Royal Tunbridge Wells both petitioned for the honour in recognition of their history as well as royal patronage of their facilities.

Leamington Spa was granted the title in 1838 by Queen Victoria, while Tunbridge Wells was recognised in 1909 by King Edward VII.

It is reported to be a similar process for town names that have the Latin suffix ‘Regis’ added to them, meaning “of the king” or “belonging to a king” (like Bognor Regis, for example, after King George V stayed there) although this is usually given to towns frequented by royalty – or where they have convalesced, as in King George V’s case.

Chester was visited by The Queen in June 2018, alongside The Duchess of Sussex in the first official royal outing to be shared by the pair. That’s unlikely to be enough to seal the deal though.

What do you think? Should Chester be renamed ‘The Royal City of Chester’? Let us know on social media or in the comments box below!