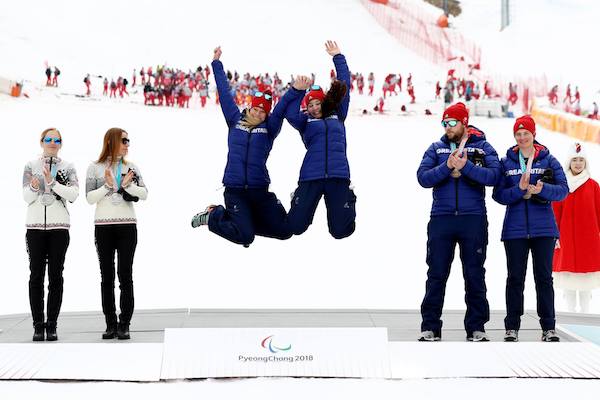 Menna Fitzpatrick, born in Macclesfield, has been confirmed as Britain’s most decorated Winter Paralympian ever following a sensational podium-topping performance in the women’s visually-impaired slalom at the 2018 Winter Paralympics in Pyeongchang.

Menna and her guide Jen Kehoe had already won two silvers and a bronze in South Korea from earlier events.

Their performance in the slalom meant GB securing its first gold at the 2018 Paralympic Games and only the country’s second ever Winter Paralympic gold.

Menna has only 5% vision, and skis with her guide Jen. In 2014 the pair were the first British winners of the World Cup Visually Impaired title at the International Paralympic Committee’s World Cup in Aspen.

Commenting on her Pyeopnchan success, Menna told BBC Sport: “We wanted to show what we are capable of. I am so proud of what we did out there.”

“I felt that we skied really well. We went for it and as soon Jen said go for it, we flew down that last bit,” Fitzpatrick added.

Kehoe told the BBC: “We were trying to keep it together on the medal podium because it was hugely emotional. It’s unbelievable to win a gold medal and it is beyond our wildest dreams.”

ParalympicsGB will now come home with a superb seven medals, the most successful tally in its history.

Menna and Jen communicate on the slopes via bluetooth headsets, and Jen wears brightly coloured clothing.

19-year old Menna dramatically crashed out early on in their opening downhill event, however, recovered to finish third in the super-G before taking the runners-up spot in both the super combined and giant slalom competitions.