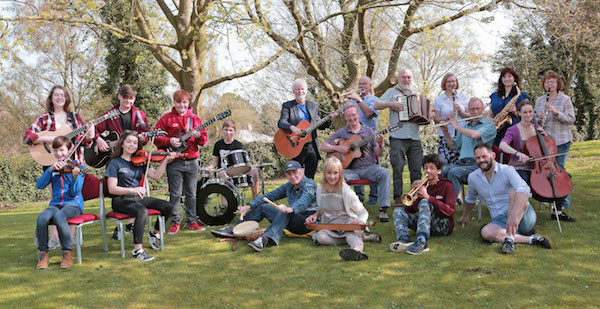 A unique part of Chester’s dramatic history is set to be broadcast around the world this Easter.

The renowned Chester Mystery Plays will be streamed on YouTube on Good Friday for the first time in the spectacle’s 700-year history.

Live recordings of Act I and Act II of the 2018 cycle (the plays take place every five years), will be broadcast at 10.30am on Friday 10th April and remain available online for a further eight weeks.

The 2018 cycle was directed by Peter Leslie Wild and performed at Chester Cathedral. The production was watched in-person by more than 7,000 people.

It was highly acclaimed by critics – describing it as ‘an impressive spectacle’ (The Stage), ‘an artistic triumph’ (The Chester Chronicle), ‘a celebration of a community’ (Northern Soul) and ‘powerful and magnificent’ (North West End).

Many of the 150 community actors who took part in the 2018 Chester Mystery Plays were due to take part in the Chester City Passion on Good Friday.

The annual promenade performance throughout the city usually starts at 10.30am on Good Friday but was cancelled in mid-March in light of government restrictions, imposed to limit the spread of coronavirus.

Peter Leslie Wild told us: “Community theatre plays such an important role in people’s lives and in these days of social distancing and isolation many will be missing the friendship and companionship of projects like the Chester Mystery Plays and the Chester City Passion.

“This broadcast is a wonderful opportunity for cast members, friends and the people of Chester especially to be reminded of happier times.”

The Chester Mystery Plays tell Bible stories – including The Creation, Noah’s Ark, The Nativity and The Crucifixion .

They were first written in the 14th century and performed by the guildsmen of the city on wagons around the streets.

Since their modern revival in 1951, the plays have been performed in the city once every five years.

The 2018 cycle was written by Deborah McAndrew and designed by Dawn Allsopp, with original music composed and directed by Matt Baker.

Deborah McAndrew said: “These plays are an important part of the history of theatre; and scholars and theatre lovers from around the world travel to Chester when they are performed.

“As much of the globe is in some form of lockdown, this YouTube performance offers the opportunity to share with the rest of the world this unique part of Chester’s dramatic history.”

The recording was made by PH Production Services Ltd and will be shown on the Chester Mystery Plays channel on YouTube.

Ian Sanderson, chairman of the Chester Mystery Plays Company Ltd, commented: “I would like to thank the professional production team for agreeing to waive their rights to this production to allow us to stream it live on YouTube.

“The Chester Mystery Plays are a huge commitment for our community cast and we are delighted to be able to share their performance with a wider audience during this difficult time.”