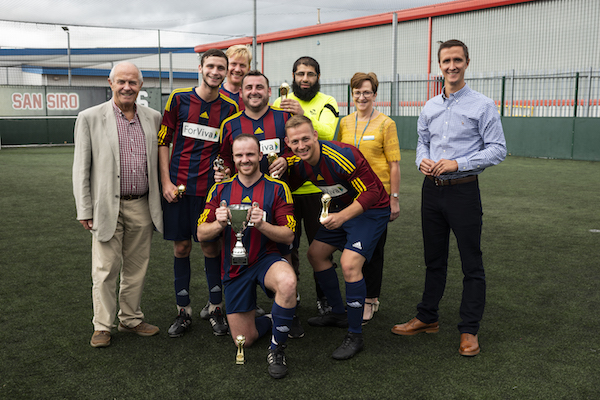 Teams from organisations that support homeless people and people suffering with mental health issues across Cheshire took part in a charity football tournament earlier this week.

The tournament, which is now in its ninth year, is named after hostel resident Barry Whitham who died in 2008, aged 23.

ForViva Group entered two teams, with their ‘Team A’ crowned the winners.

Toria Buzza, who is wellbeing lead for Cheshire West and Chester Council, coordinated the ForViva Group’s teams and played on their ‘Team B’.

Toria said: “ForViva were really proud to participate in such a fantastic event, which brought people and players from across the area and services together.

“Football is a real leveller and when you are on the pitch all labels and titles are forgotten. The tournament is a real example of how we can work together with partners to improve lives.

“Credit needs to go to all the teams who played for creating such a good atmosphere.”

Cllr Bob Rudd presented the trophies to the winners of the tournament alongside Henry Terefenko from ForViva and Janet Lawton from Forfutures.

Tournament organiser Levi Lloyd commented: “The tournament is a fantastic opportunity to bring together staff and customers from a range of organisations to compete and raise awareness of homelessness and mental health and wellbeing.”