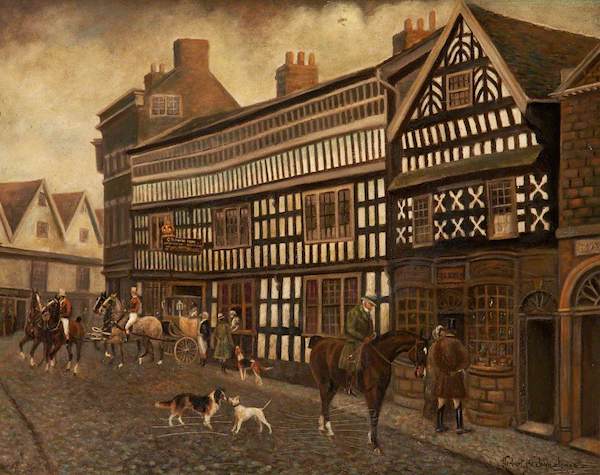 A new booklet entitled ‘The Crown – a brief history of this historic inn’ has been launched by Nantwich Museum.

It adds to the popular range of booklets which explore various aspects of the town’s history.

Authors of the very popular ‘Nantwich Pubs’ book, Andrew Lamberton and Bill Pearson, found during their research that they had far more material about The Crown than would fit into their book (covering all of the town’s pubs) and decided to write a booklet solely about this historic pub.

The Crown is one of three Grade I listed buildings in Nantwich.

It’s one of the town’s oldest pubs, and was one of seven inns destroyed by the Great Fire of Nantwich in 1583.

Nantwich Museum’s new booklet outlines the history of The Crown before the Great Fire and also covers the rebuilding after the fire, with Queen Elizabeth I’s support.

Numerous personalities from the world of show business have stayed at The Crown, and three famous Formula One racing drivers have also stayed there whilst racing at Oulton Park.

The booklet contains old photographs, and other materials, given to the museum by the pub’s owner Bill Schofield.

Bill’s father, William Schofield, bought The Crown in 1962. At that time the building was in a perilous state and extensive renovations had to be made.

The previous owners had put a tiled roof on the ballroom which was too heavy for the walls to support – it should have had a slate roof.

Over 25 tons of steel were put around what is now the Georgian ballroom to save it from demolition.

Other famous owners of The Crown include the Piggott family, who ran The Crown Inn for over 30 years and whose descendants included jockey Lester Piggott (arguably the greatest flat racing jockey of all time).

Inevitably, in such a historic pub, there are tales of ghosts as well. Ghosts include Roger Crockett, a landlord of The Crown who was murdered in the town in 1572.

The booklet is one of an increasingly wide range of booklets from Nantwich Museum, detailing various aspects of local history.

‘The Crown – a brief history of this historic inn’ is available from the museum’s shop, and also from The Crown.

It costs just £2.95, with all profits going to support Nantwich Museum.