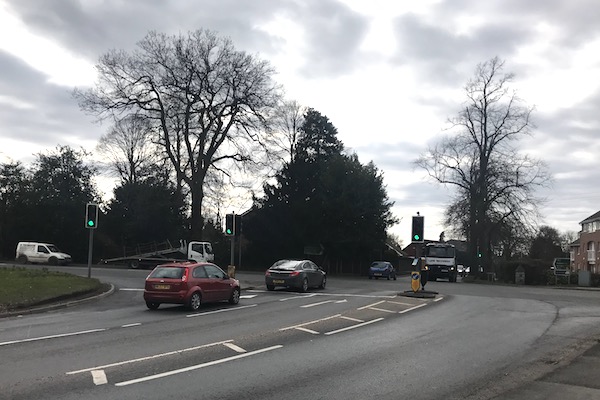 A petition has been raised regarding problems encountered by pedestrians and motorists at a busy junction in Holmes Chapel.

Local residents complain that they find it difficult to cross the road on foot at the A50/A54 crossroad, particularly when heading north (towards the centre of the village) as pedestrians can’t see traffic coming towards them around the corner.

The Holmes Chapel Partnership has set a target of gathering 1,000 signatures on the petition – with over half of that total (almost 600) gathered so far.

The petition was also discussed at the Annual Parish Meeting last night (Tuesday 20th March 2018) and campaigners were advised that personal letters from those affected would add weight to the petition.

In a draft letter to be sent to Cheshire East Council, Holmes Chapel residents say: “This is a very busy junction, especially in the morning/evening rush hour, and when there are problems on the nearby M6.

“It is used throughout the day by many people in the village – including elderly residents from Bernard Court (located at the junction), school children, people going to work or the railway station, and people going to and from the shops, library and health centre.

“Currently there is only one light controlled crossing point, on the north side of the junction; crossing the highway on the other roads, especially north/south on Chester Road (and Station Road), is extremely hazardous due to very limited visibility of (and by) traffic turning into these roads from London Road, especially HGVs turning left from London Road into Chester Road.

It continues: “I understand that Cheshire East have a plan to replace the existing traffic lights with a roundabout, funded by S.106 monies from the impending Bloor Homes development on London Road, Brereton.

“This raises the issue that, without any traffic lights forcing traffic to stop, crossing the road will be even more hazardous.

The petition calls upon Cheshire East Council to provide safe crossing points for pedestrians, preferably controlled by lights, at the A50 London Road / A54 Chester-Station Road junction.

It adds that this is particularly significant given plans announced to replace the existing traffic light controlled junction with a roundabout.

It states: “Both the A54 and A50 are very busy roads, especially on weekday ‘drive times’ (people going to/from work and to/from the schools) and when there are problems on the M6, with many HGVs negotiating the junction (due to the 7.5t weight limit through the centre of the village).

“There is currently only one safe, pedestrian controlled, crossing on the north side of the junction; there are no safe crossing points on the other three sides, making it hazardous for pedestrians crossing the road – especially crossing Chester Road, where visibility of traffic travelling north on London Road into Chester Road is extremely poor.

The petition can be signed online or via one of the paper copies kept in the library or at Holmes Chapel Parish Council offices. The online petition closes on 31st March.