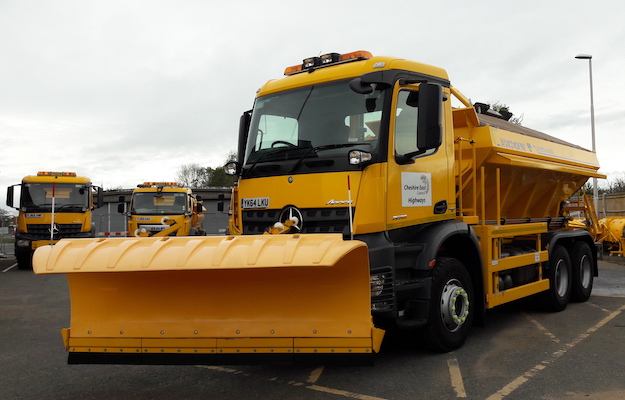 Cheshire East Council’s highways teams are geared up to face the coming winter weather – as forecasters predict an arctic blast will hit the region this weekend.

Their aim is to keep the roads moving and, as winter approaches, the teams are prepared to work around the clock to keep the borough’s key routes open and safe.

The council says that its supplies of salt have been replenished and its fleet of 19 gritters are on standby to treat the road network.

Gritting routes are planned and include the recognised high-level roads to the east of the borough, where snow and ice tend to have the most severe impact in cold weather.

The gritting teams treat up to 1,200 kilometres (750 miles) of road when wintry conditions hit.

The gritters, which feature location trackers, will be on standby 24 hours a day, seven days a week until the end of April.

“We started treating the high routes as early as 6th October this season, so it was crucial that our gritters were ready and our salt stocks remain high.

“Winter weather can be extremely unpredictable, so we monitor the weather conditions closely to ensure that our gritting routes are treated at the right time.”

Cllr Stockton added: “We also urge residents to take great care when driving or walking when it’s icy or snowing.”

“Although we treat nearly half of Cheshire East’s road network, we cannot ensure that every road will be clear of snow and ice all the time, especially on untreated roads.”

Treatment of the roads in winter takes place on a precautionary basis to prevent ice forming, with snow being dealt with using specialist equipment such as attachable snow ploughs.

Residents can now track Cheshire East’s gritting vehicles (something we have to confess, for some reason, we’re very excited about here at So Cheshire) at www.cheshireeast.gov.uk/highways

And because you can never have to much knowledge about gritting, here are some CEC gritting vehicle facts…

● Approximately 10,000 tonnes of rock salt is used for treating the highway network in an average winter

● They treat a total 1,200km (750 miles) of primary roads when ice or snow conditions are forecast

● A normal gritting route takes approximately four hours, when treating the network for a forecast of ice and hoar frost. The aim is to complete all these routes before 7am. (This depends on the forecast – for instance, rain could delay treatment)

snow surrounding each granule into a saline solution, which prevents ice from forming

● Approximately 6,200 tonnes of rock salt is stored locally and is regularly replenished during the winter season