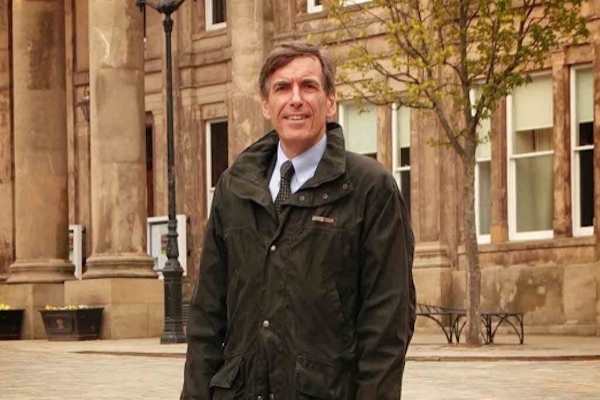 In this article, we speak to David Rutley, standing for the Conservatives in Macclesfield.

Since first being elected in 2010, it has been a great honour to represent local residents and communities both locally and in parliament.

This is a vital election for the nation. It’s time to move forward, put the current uncertainty behind us and leave the EU with the negotiated agreement.

I respect the result of the 2016 national referendum and believe that delivering a negotiated agreement on the UK’s withdrawal from the EU is an important priority.

I consistently voted for leaving the EU with a deal in parliament.

That’s why I am pleased that the prime minister has renegotiated a new deal, which allows us to leave the EU without disruption.

It will provide greater certainty, so we can get on with the priorities we share. Investing an extra £33.9 billion in the NHS, hiring 20,000 new police officers and increasing funding for schools.

I actively support many community groups and civic events across the constituency.

I remain committed to serving every constituent regardless of their political views, and as your MP I would continue to hold regular advice surgeries across the constituency.

I am now seeking your support to continue all this important work in the next parliament.

Working with local community groups, I successfully campaigned to save adult mental health beds in Macclesfield and also secured the future of A&E services at Macclesfield Hospital.

We now need to actively support the delivery of The Christie Cancer Centre at the hospital.

I campaigned with other local MPs for improved school funding in Cheshire East, which will now be boosted from next year for every pupil in every school across the constituency.

I am pressing for more action to revitalise Macclesfield town centre, having secured £5 million to improve public spaces and help make it a more distinctive destination.

We need to tackle climate change, protect the environment, safeguard the green belt and enhance air quality in Broken Cross and Disley.

I actively support the police to crackdown on crime.

I am also campaigning to deliver the £50 million Poynton relief road to tackle traffic congestion in the village, and to improve flood management in Poynton, Bollington and Kettleshulme and rural broadband in our villages.

I work hard to strengthen the local economy. I actively support AstraZeneca’s ambitions for its Macclesfield site, the life science sector and our vital small businesses to create more local jobs.

Beyond the important task of our withdrawal from the EU, a future majority Conservative government is committed to investing an extra £33.9 billion per year in the NHS by the end of the parliament, which I fully support.

School funding will increase by £14 billion over the next three years, so that every secondary school in our area will receive a minimum of £5,000 per pupil next year, and every primary school £4,000 per pupil from 2021-22.

A Conservative government will also go on tackling crime and keeping communities safer by putting 20,000 more police officers on the streets.

We will also invest responsibly in infrastructure, including Northern Powerhouse Rail, and science and technology, which is so vital for local jobs.

To do all this, we need a strong and vibrant economy, so we can invest in our public services in a sustainable and practical way.

We will also take further important steps to tackle climate change by delivering on our world-leading target of net zero greenhouse gas emissions by 2050, as advised by the independent Committee on Climate Change.

Tackling climate change is clearly an urgent priority and I am pleased that it is a key Conservative manifesto pledge.

While serving as the forestry minister at Defra, I strongly supported major tree planting initiatives across the country, including the Northern Forest.

Tree planting is vital in tackling climate change and helping to adapt to its impact through initiatives such as natural flood management.

It’s good to see the manifesto sets out wider ambitions to significantly increase tree planting over the next parliament.

As a Defra minister, I also successfully supported legislation to: ban wild animals in circuses; ban third party sales of puppies and kittens – helping the fight against puppy farming; ban the sale of ivory; and protect service animals through ‘Finns Law’.

I strongly support initiatives, such as the local Emotionally Healthy Schools programme, which make a real difference in young people’s lives.

I will continue to campaign to give greater focus to this important issue.

I live in Macclesfield with my wife Rachel – a physiotherapist – and our children.

Outside politics, in any spare time that I have I love spending time in the Peak District, rock climbing on local crags and enjoying family walks.

I am a keen mountaineer, and have climbed in mountain ranges throughout the world. I also enjoy fishing and birdwatching.

In Parliament, I have also served as the co-chairman of the Mountaineering All Party Parliamentary Group (APPG) and secretary of the National Parks and the Mountain Rescue APPGs.

Prior to first being elected to parliament, I spent most of my career in business working as a senior executive with companies such as Asda (where I ran the home shopping and e-commerce businesses), PepsiCo International, Halifax General Insurance and Barclays.

I also worked as a special adviser at the treasury, the Cabinet Office and the Ministry of Agriculture from 1994-96.