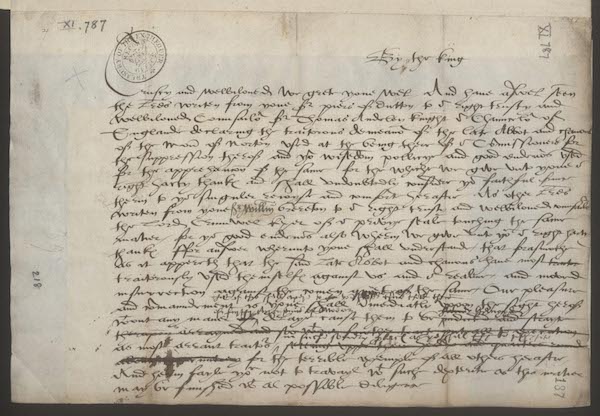 A 16th century draft letter, demonstrating King Henry VIII’s infamous temper, is to go on display at Norton Priory from 5th May.

The correspondence is believed to have been written under dictation from Henry to a secretary. It responded to the news that the canons and local people had stopped his men from closing the abbey during the Dissolution of the Monasteries in 1536.

Evidently enraged, King Henry VIII initially demands that the abbot of Norton Abbey be hung, drawn and quartered – with the body parts displayed around the country!

Intriguingly, this has been crossed out and replaced simply with ‘hung’.

Why Henry changed his mind remains a mystery, although research into this and other letters provides a number of possibilities.

Sean Cunningham, head of medieval at The National Archives, explained: “As a king with a reputation for delegation of the routine business of state, this draft signet warrant shows that Henry VIII did, in fact, take a very close interest in events that threatened his power and undermined his sovereignty.

He continued: “We can almost hear his outrage as he decides on the most effective response to the news of events at Norton Abbey.

“Although ministers like Wolsey and Cromwell were famous for doing most of the bureaucratic moving-and-shaking on Henry’s behalf, the king was educated and intelligent enough to know when and how to bend the system to his will when necessary.”

Dr Andrew Abram of Manchester Metropolitan University added: “It is possible that the High Sheriff of Cheshire, Piers Dutton, who reported the resistance at Norton was deliberately exaggerating the situation and provoking the king to further his own political goals.”

Dr Mel Evans from the University of Leicester said: “The closure of the monasteries was a time of significant political and religious upheaval, and London struggled to keep pace with regional developments.

“Local magnates, like Lord Brereton, and others with access to the King’s ear, may have helped to persuade Henry to order a (relatively) more benevolent punishment – although this would be small comfort to the abbot.”

By the 1530s monasteries were seen as corrupt and out of touch with the common people of England and Wales. It was also a time of increasing tensions between the Catholic pope in Rome and King Henry VIII.

In 1531 the King severed England, Wales and Ireland from the authority of the Roman Catholic Church. His next step was to disband the monasteries.

He did this partly to reform the church but also to strip the monasteries of their wealth.

The letter, which provides a fascinating insight into the period, will be on loan to Norton Priory from The National Archives until the end of August.

The draft correspondence is one of a number of surviving letters that passed between Henry, Thomas Cromwell (his chief advisor during the period of the Dissolution) and lords such as Piers Dutton in the North West.

It will be accompanied by a 16th century silver-gilt reliquary from the Victoria and Albert Museum – demonstrative of the wealth of the monasteries at that period.

Frank Hargrave, director of Norton Priory Museum & Gardens said: “We are enormously grateful to The National Archives and Victoria and Albert Museum for the loan of the draft letter and stunning reliquary.

“Their loan programmes provide a fantastic vehicle for the display of nationally important artefacts to regional audiences.”

The site where Norton Priory Museum stands today was originally founded by Augustinian canons in 1115 before becoming a mitred abbey in the late 14th century.

In the subsequent centuries the site saw the production of stunning medieval architecture and art.

Following its dissolution by Henry VIII it became the home of the Brooke family, in the form of a major manor house for over, 400 years, before it was demolished in the 1920s.

It was not until 1985 – after ten years of the most complete archaeological excavations of a monastic site in Europe – that the museum first opened its doors to visitors.

Find out more at: www.nortonpriory.org