Bentley box to boost memory for people with dementia 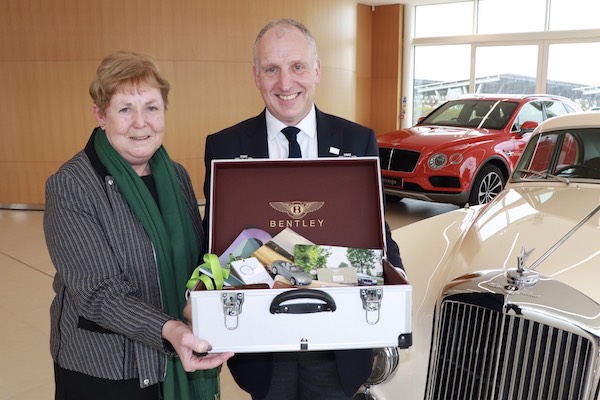 Specialists from the firm’s Pyms Lane factory have lined the box with leather and gold embroidery, using their world-renowned precision.

The box was then filled with swatches of leather, walnut and carpet, pictures of vintage Bentley motor cars and a sample bottle of the new Bentley cologne.

The Bentley box will now be used at charity teas which are held each month to help people living with dementia to socialise.

Di Riley, co-ordinator of the You, Me and Tea Cafes, explained: “The box is more than we could have ever wished for and I think this will definitely be very popular with our attendees.”

The monthly events use a series of interactive games, activities and exercises to help those with dementia remember aspects from their long-term memory.

This is crucial, since this element of the brain usually remains relatively preserved during the early stages of Alzheimer’s.

Di added: “Bentley is such a significant part of the memory of the people of east Cheshire, and some attendees may well have worked there or known someone that did too.

“It will certainly create a valuable talking point for those attending.”

Karl Shirley, head of Bentley Experience, said it was an honour to have created something with such significance for the community, especially during Bentley’s centenary year.

Karl said: “It felt only right when we were given the box to fill, that we made the interior special too with our dark red leather and gold embroidery.

“We are looking forward to hosting a cafe here in the showroom in the future and we hope the box goes a little way to help the attendees remember forgotten times.”