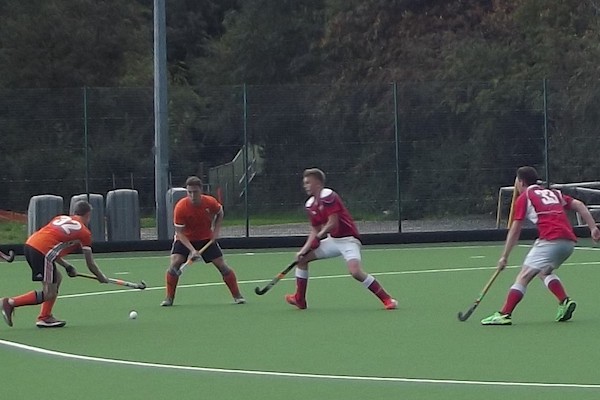 Wilmslow started brightly and went ahead early on when Pete Hallinan cleverly lifted the ball into the corner after a flowing move down the left hand side led by man of the match Simon Swatland.

Newcastle grew into the game and had a great chance to equalise but missed a penalty stroke which went well wide of the goal.

Wilmslow also couldn’t convert a penalty stroke after the Newcastle goalkeeper took out Hallinan when clean through.

Wilmslow were punished for this when Newcastle equalised on the counter.

Joe Booth put Wilmslow back in the lead with the last action of a disjointed first half from a penalty corner from which he slipped the ball in at the near post.

Wilmslow started the second half sharper than their opponents and twice extended their lead when David Boddy popped up at the back post twice in quick succession to score a quick fire double and keep Newcastle on the back foot.

Newcastle scored two in reply after sloppy Wilmslow defending but the men in orange held on for a second successive victory to maintain true good start to the season.

Wilmslow 2s had a creditable 3-3 draw away to Triton 1s.

The recently promoted 3s lost a close encounter with Warrington 1s by a single goal and the Men’s 4s lost to a skilful Alderley Edge sixth side.

The Ladies 1s had an excellent 2-2 draw with Lindum 1s, away at Lincoln.

They have now picked up four points from their first two games in the North Division.

The 3s had a good game against Sale 2s and ended up 4-3 winners.

The 4s, with their mixture of youth and experience, go marching on since their promotion with a 2-1 win against Northop Hall 2s.