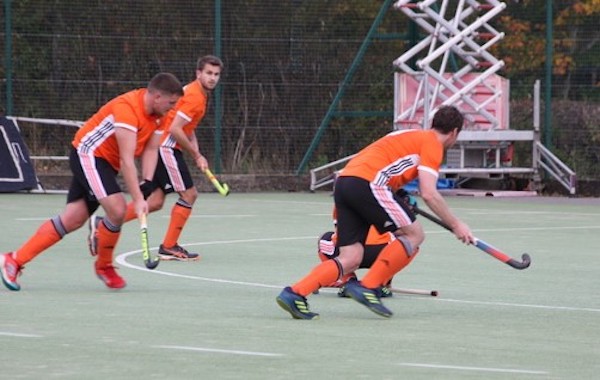 Wilmslow Men’s 1s gave a spirited performance away to table toppers Bowdon 2s, although ultimately came away with a 5-2 defeat.

Bowdon started with a high press but Wilmslow matched their opponents in the opening 20 minutes as both teams sized each other up.

Bowdon took a quick 2-0 lead as they managed to overload the Wilmslow defence twice in 3 minutes.

Wilmslow got back immediately as Cam Armstrong struck a reverse into the far corner after good build up play from Wilmslow’s youthful front line – the Oranges’ front line had an average age of just 16, and they tested an experienced Bowdon defence throughout.

After halftime, Bowdon extended their lead with a well worked goal, and Wilmslow did well to absorb a lot of pressure around their ‘D’ and began to grow back into the game.

Ben Jones gave Wilmslow a lifeline with his first goal for the first team after striking home a loose ball in the ‘D’.

At 3-2, Wilmslow were beginning to look dangerous but as the game concluded the Oranges tired and Bowdon added two further goals.

Finally a last minute Wilmslow effort from a penalty corner hit the post leaving the scoreline 5-2.

This was however a much improved Wilmslow performance and gives a good platform to build from over the next few games.

The Men’s 2s trounced Wigan 1s, 12-1, in a very one-sided contest at Oakwood Farm to go top of the league.

The 3s drew 2-2 away to Alderley with a last minute equaliser and the 4s shared the spoils 1-1 with Triton 3s.

Wilmslow 1s, although the superior side, left it very late in the day to prove it with two late goals to keep them in the hunt for the league.

The 5s – with lots of new faces – show plenty of promise but went down 3-0 to Bebington 3s.