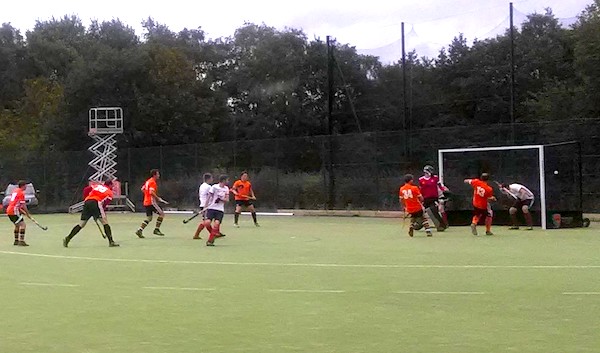 Without their two main strikers, Wilmslow 1s travelled to near rivals Alderley Edge for what resulted in a closely fought game.

Either side had chances to steal all the points; a draw, on reflection, was a fair result.

Wilmslow started the brighter of the two teams and after a passage of slick play down the right-hand side; newcomer Danni Harvey excellently found the corner and opened the scoring.

1-0 within the opening 4 minutes. Buoyed by the early setback, Alderley began pressing higher up the pitch and gained more of a foot in the game.

The Edge were back in it before the half-time break when a loose ball found their attacker thanks to a lucky miss trap within the ‘D’.

The second half was a similar story with both teams having their fair share of the ball but few clear-cut chances were created.

Wilmslow were moving the ball effectively and, in the 64th minute, thought they had taken all the points when Hannah Coulson and Danni Harvey exchanged passes leading into the final third.

Coulson’s first shot was well parried however she latched onto the rebound and slotted it underneath the keeper, 2-1 to the visitors entering the final five minutes.

Unfortunately for the girls, a late penalty corner was conceded and after an initial break down, an Alderley player was able to grab a final touch and convert to make it 2-2.

Although the girls were disappointed to drop points with conceding a goal so late on, the point extends their unbeaten run in the league to 33 games over 21 months.

The girls go again next week at home against Sale ladies and are looking to get back to winning ways.

Wilmslow Ladies’ 2s had a rare off day at home going down 1-3 to Warrington 1s.

The 3s had a solid 2-1 away win which keeps them as runaway leaders with four wins out of four.

The 4s now move to second place with a convincing 5-2 win over Bowdon 6s, and the 5th XI drew away against Whitchurch 3s (1-1).

Returning back to the clubhouse after their trip to Sheffield, the 1s had a difficult job explaining to club members that in spite of the scoreline it was an even game which they could have won.

Wilmslow edged a tight and even first half, and took the lead when Matt Westbrook slotted home a penalty flick after David Boddy had been cruelly brought down by the goalkeeper with the goal at his mercy.

Whilst Wilmslow took a slender lead into the interval, the gap between the teams should have been wider as the men in orange squandered 3 good chances to extend their advantage.

The second half started in a similar pattern to the first, but Chapeltown drew level when the ball was lifted across the Wilmslow ‘D’ for a simple finish at the back post.

Chapeltown were shortly in front when they again reacted quickest in the ‘D’ to a loose ball when it seemed that the danger had passed.

Wilmslow were now straining to get back on the front foot, but as the game got stretched Chapeltown extended their advantage with three quick fire goals in a nightmare final five minutes to add gloss to the score line of an otherwise tight game.

Next up for Wilmslow are Neston as the Oranges look to get back to winning ways.

Wilmslow Men’s 2s clicked into gear in the second half against a good Blackburn 1st XI, running away 7-3 victors.

The 3s had a normal day in the office to win 2-1 away to Denbigh 1s to go top of the table.