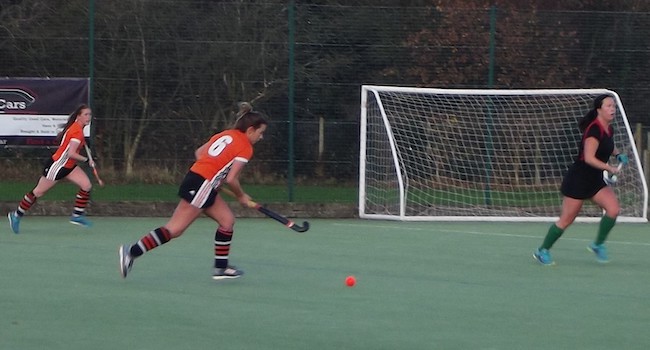 In the last home game before the new year, Wilmslow were seeking 3 points against a team which has in the past tended to be a bogey opposition for the girls.

The Tangerines started well and their high press created a turnover in the opposing 23.

Midfield maestro Annika Hall took the ball confidently and strode into the ‘D’ unleashing a superb shot into the top left hand corner of the goal. 1-0 to the home side within the first minute.

Wilmslow were continuing to have a huge share of the possession and Lindsay Rachubka’s wicked attempt proved too hot for the keeper to handle and was parried into the onrushing Becca Healey who tucked away the rebound confidently; 2-0.

Charlie Westbrook-Platts rounded off the goals before half time; her initial shot was saved and fell kindly back into her path with the keeper unable to keep out her second attempt.

3-0 flattered the visitors in a half which had seen Wilmslow dominant but not clinical enough in the final third.

The second half started similarly with Wilmslow eager to add to the score line.

Excellent play by South African Carla Botha saw her shot on the line saved by a Wrexham body. Rachubka stepped up to take the penalty stroke which was never in doubt; 4-0 to the hosts!

The girls were looking to take the game well beyond Wrexham’s reach and a lovely PC routine saw injector Emilie Kelman grab her first of the game with a fine finish on the near post.

Botha made it 6 not longer after with a sublime finish from an acute angle.

The ball was soon in the Wrexham 23 again and Healey was in the right place at the right time to tap in her second of the match.

Excellent play by Emilie Kelman saw her weave through multiple defenders and squeeze her second goal of the game under the onrushing Wrexham keeper.

Minutes later Healey round off her hat-trick with a lovely reverse shot evading the goalkeepers outstretched pads.

By this time Wrexham were finding no answer to Rachubka, Botha and Healey up front and Wilmslow rounded off the scoring in the final minute when Botha tucked away her second goal at the second time of asking.

An outstanding team performance and 10-0 win saw the team record their highest scoring victory in a North match to date.

This secures their top of the league status and sees their goal difference rise to 31.

The girls travel to local rivals Timperley next weekend in what promises to be a tight affair.

Wrexham obtained some measure of revenge against the tangerines when their second string won at home 5-0 against Wilmslow 4s.

The 5s won 2-1 against Triton 3s to climb into the promotion zone.

Wilmslow travelled to Deeside for a clash of two teams near the bottom of the North Division 1 table.

The men in orange started slowly and were punished as a Deeside forward reacted quickest to slam home a loose ball.

Wilmslow were struggling to get into the game but were level mid way through the first half.

A long ball by Martin Wright was taken down by Cameron Armstrong, who combined well with Joe Booth before Pete Hallinan slid the ball into the corner.

Deeside took the lead again shortly before half time when Wilmslow failed to clear a short corner, and took a deserved lead into the break.

Wilmslow started the second half with greater intensity but missed a couple of good opportunities to level the scores.

The injury depleted oranges started to tire and Deeside extended their lead with two quick fire goals, which stunned Wilmslow into action.

Ben Jones pulled a goal back with a volleyed finish and a series of short corners gave Wilmslow to opportunity to put pressure on Deeside but they were unable to take their chances and ended with a 4-2 defeat.

The Men’s 2s kept up the pressure on the top two with a 3-1 home win against Preston 3s.

The Men’s 3s had a long away trip to play Rhyll 1s and came away with a creditable 1-1 draw.