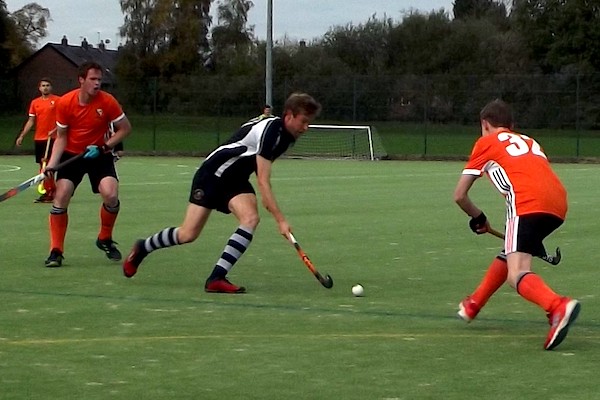 Sheffield University Bankers made the trip across the Pennines to take on Wilmslow Men’s first team on a sunny autumn afternoon at Oakwood Farm.

Neither side truly asserted their dominance in a cagey opening 25 minutes, as the Bankers tested Wilmslow with some direct running and Wilmslow tried to get their trademark passing game going.

Wilmslow took the lead mid-way through the first half when Andy Hunt popped up at the back post to deflect a Steve Edmonds snap shot into the net.

Bankers were level shortly after half time as Wilmslow couldn’t clear a short corner and the ball was bundled home.

Wilmslow started to build the pressure and had a sustained period of 15 minutes camped in the Bankers’ half.

Bankers were holding out but Wilmslow were starting to show signs of being able to break down their well organised opponents.

Wilmslow were unlucky therefore to concede on the break as the ball was slapped across the ‘D’ for a man sliding in to tap in.

The men in orange attempted to rebuild but were victims of losing their focus and discipline.

The Tangerines received three costly cards which left them with a numerical disadvantage for the remainder of the game.

Bankers took advantage of this and added two further goals to add gloss to the score line and complete a 4-1 win, and consign Wilmslow to a rare home loss.

Wilmslow Men’s 2s move up to second place in the league with a fine 3-2 away at Didsbury Northern.

The 3s lost 1-4 to a strong Brooklands fifth squad.

Wilmslow had a predictably close game with their West Cheshire visitors with whom they fought for top honours most of last season.

Deeside managed to gain revenge for last season by being faster on the attack.

For the Oranges, Hannah Coulson was a thorn in the Deeside defence and from one of her attacks Wilmslow opened the scoring when a shot from the ever-sharp Lindsay Rachubka was deflected in by Maddy Troup.

It looked as if the Oranges would slowly grind down Deeside when Aneka Hall tapped in a second.

Unfortunately Wilmslow had an off day with their movement out of defence and always looked vulnerable to Deeside’s very fast breaks.

One has to look back a long way to find when keeper Cat Lang last had to fish the ball out of her goal on three occasions in one match.

A rare but fair defeat against a good side has cost Wilmslow top slot, for now.

Wilmslow Ladies’ 2s, 3s, 4s and 5s all played their opposite numbers from Neston HC and a Tangerine tide totally eclipsed the pink shirts of the Wirral club.

Although the Ladies’ 1s relinquished top spot, the Ladies 3s and 4s now sit atop their respective leagues.