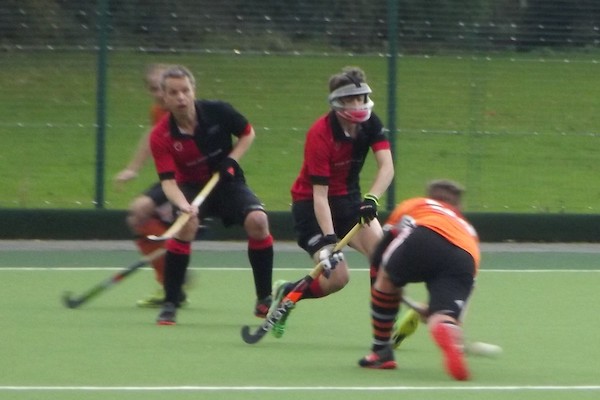 With a good crowd in the new stand, Wilmslow had a chance to go level on points with Bowdon at the top of the North Division One table.

The game started tentatively with both teams trying to get into their flow.

It was Bowdon who were looking more dangerous and Simon Pickering made a sharp save in the Wilmslow goal to keep the game goalless 15 minutes in.

Bowdon took the lead only two minutes later though with a sharp finish after a quick counter attack.

Wilmslow struggled to get a foothold in the game in the first half although managed to scramble to half time without any further damage to the scoreline.

Bowdon came out of the blocks quickly in the second half and doubled their lead within 30 seconds of the restart.

Another quick fire goal left Wilmslow facing an almost impossible task with just under half an hour left.

To their credit, the men in orange did summon some urgency and start to impose themselves on the game.

A flurry of second half short corners offered repeated opportunities to spark a comeback, but in a similar story to recent weeks Wilmslow couldn’t convert their short corner chances.

Bowdon punished Wilmslow for their wastefulness with two late goals.

On the run of play Bowdon were worthy winners but were flattered by the scoreline.

Next up for Wilmslow is a trip to Preston as the men in orange look to get their promotion bid back on track.

The home team crowd made it clear just what this local derby win against Wilmslow second string meant to them.

The 4s lost by the same score (1-5) to Sandbach 2s and to complete an uncharacteristically miserable day for the men’s teams, the 5s, with its new record age range of 13-72, went down to Bramhall 3s (3-6).

The Ladies’ 2s held league leaders Alderley 3s to a creditable 1-1 draw, but the 3s lost to a strong Bowdon 4s side.

The result of the day was the Ladies’ 5s’ (7-1) home victory against Golborne 4s in the first game in front of the new stand at Styal.