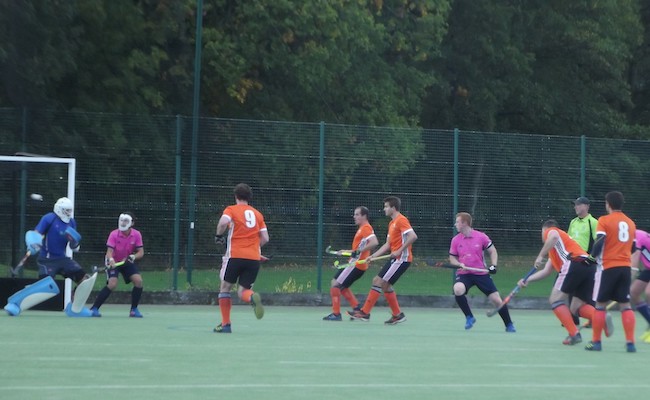 Wilmslow Hockey Club’s Men’s 1s made the trip away to Stockton and were unlucky to come away with a 3-1 loss.

Wilmslow started brightly and took an early lead as David Boddy converted a ball into the ‘D’ after a good move down the left.

Wilmslow were, however, struggling to deal with Stockton’s wind-assisted aerial threat, and looked vulnerable at the back.

Stockton levelled when a long ball evaded the Wilmslow defence and was slotted past a helpless Simon Pickering in the Wilmslow goal.

Stockton took the lead with a low strike from a short corner and then continued to press the Wilmslow defence aggressively.

It was 3-1 shortly afterwards when a Stockton man popped up unmarked at the back post to tap in after another long pass.

Coach Rob Turner rallied his Wilmslow troops at half time and Wilmslow started the second half in controlled fashion.

Defensively, Pickering was now bossing the ‘D’ and offensively Wilmslow were building promising attacks through the midfield.

Wilmslow won a succession of corners which the couldn’t convert, until with 10 minutes left Matt Westbrook had a goal harshly disallowed after a short corner routine had broken down.

Although Wilmslow remained on top for the rest of the game, the men in orange couldn’t find another breakthrough and ended with a 3-1 defeat.

The Men’s 4s had a well fought match against Sale 2s which ended in a fair result: 1-1.

Current stars of the men’s section, the 5s XI, with their ‘mature’ defence and youthful forward line beat Sale 3s 4-1 to stay top of the table.

Wilmslow Ladies’ first team travelled to Crewe on a ferociously windy Saturday; a venue that often proves challenging for the girls, having only managed a point there last season.

The Oranges started the brightest of the two sides with their press pinning the Crewe backline in their own 23 for long periods.

After a few near misses, a persistent midfield worked the ball nicely around and found Lindsay Rachubka unmarked on the edge of the attacking circle.

She eliminated the last defender and rounded the keeper well finishing impressively from a narrow angle.

1-0 to the visitors. Minutes later Wilmslow were rewarded with their second of the game; man of the match Emilie Kelman with an emphatic reverse stick shot into the back of the net.

In the final few minutes of the first half a pacey counter-attack from Crewe resulted in the home side pulling one back.

Wilmslow were able to regroup and began the second half as the dominant side.

Crewe were determined to stay in the game and continued to look threatening on the break, however Wilmslow’s backline remained strong – with Hannah Kelman making some outstanding last ditch tackles to thwart their progress.

The Tangerines’ attackers were putting unceasing pressure on Crewe’s defence through their intelligent leads and pacey dribbles with numerous efforts being pushed around the posts.

This pressure eventually told with two goals coming from Rachubka and young Honey Dickinson, both from set pieces; an area that the girls have made noted improvement on from last year.

A 3-goal cushion resulted in the girls losing their concentration for a brief period and following an outstanding save from a Crewe forward, keeper Lang was unlucky to concede from a rebound.

Despite their goal, Crewe were struggling to deal with the intricate passing through the lines from Wilmslow and set a half court press.

Wilmslow adapted well and kept possession nicely during the last 5 minutes to see out the game comfortably.

The victory takes the team deservedly to top of the table.

The girls are back at Oakwood Farm next weekend and play host to Deeside Ramblers, who were their nearest rivals last season, in what promises to be a tightly fought affair.

The Ladies’ 2s played some excellent attacking play to go in a half time 5-0 up against Bebington 1s and in the second half totally ran away with the match 16-0.

The Ladies 3s suffered their first defeat of the season 0-2 away to Deeside 3s.

The 4th XI had a close encounter with Deeside 4th XI but finally ran out winners 2-1 to go top of the table.