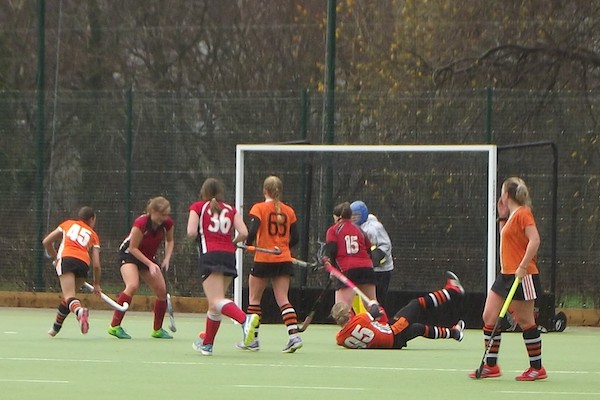 Wilmslow Ladies 1st XI were hosted by Didsbury Greys in the last match before the Christmas break.

The reverse fixture had seen Wilmslow take all the points on the opening day of the season with a 6-0 win against the recently relegated team.

Didsbury started the brighter side and were keeping the ball well, admittedly without really challenging keeper Cat Lang in goal.

Wilmslow soon picked up the tempo and were on the front foot.

Numerous chances fell their way however they were unable to convert, until a nice through ball to leading goal scorer Lindsay Rachubka saw her round the keeper to open the scoring, 1-0.

This seemed to revitalise the girls and they began to increase their share of possession.

Didsbury looked threatening on the break however the defence were key in turning over possession and returning the girls to their attacking ways.

Excellent play by Maddy Troup saw her skilfully weave her way through the Didsbury defence and play an excellent pass into Rachubka’s path.

There was no doubting the outcome; 2-0 going into the break.

Just after half time Didsbury had their best spell where Wilmslow were sluggish in response.

A careless period of play by Wilmslow allowed the hosts chance to claw a scrappy goal back.

A period of dominance by Wilmslow resulted in a succession of penalty corners. The girls were unlucky not to score off these, with some great last ditch defending by Greys.

It was during one of these PC routines that Kelman’s shot hit the body of a Didsbury player on the line; penalty flick.

Rachubka confidently strode up to round off her hat-trick.

16 goals for her and 47 for the ladies, who go into the Christmas break top of the table and 3 points clear of their nearest challengers Deeside.

The girls will be hoping to continue their momentum of seven wins on the bounce when they face Bolton away on 12th January.

Ladies’ 2s beat Macclesfield 2s, 6-0, with a spirited and aggressive performance. They go into the break with 1 point separating the top three sides.

The Ladies’ 3s drew 1-1 with Oxton 2s and stay in fourth position.

The 4s came back from a losing position to beat a youthful Alderley side, 3-2. This puts them level with second place Wrexham, on points.

Wilmslow travelled to Neston for their final game before the Christmas break.

Wilmslow started well and took the lead when Ben Jones ripped a flick into the top left corner from a short corner.

Neston equalised from a corner of their own, but Wilmslow restored their lead shortly after as man of the match Chris Stott won the ball in the middle and Joe Booth played a wonderful through ball to Pete Hallinan who rounded the keeper to make it 2-1.

Neston started the second half well and were rewarded for their energy as they again equalised.

The game started to get scrappy as the players tired and Neston took the lead thanks to a well executed counter attack.

The game finished 3-2 to Neston. Wilmslow will be hoping that Christmas gives the opportunity for some of their key players to return from injury for the second half of the season, most notably captain and vice captains, Ben James and Tom Davenport.

The Men’s 2s beat Leigh 1st by the amazing score of 14-3! Leigh had some very gifted players, which accounted for their scoring three but their overall organisation was no match for the Wilmslow machine. In the second half the visitors were totally overrun by slick passing.

The Men’s 3s drew 2-2 with Macclesfield 2s and go into the winter break only 3 points off the top.

The 5s lost, 1-3, to Alderley 7s, weighed down by fielding rather too many ‘veterans’!