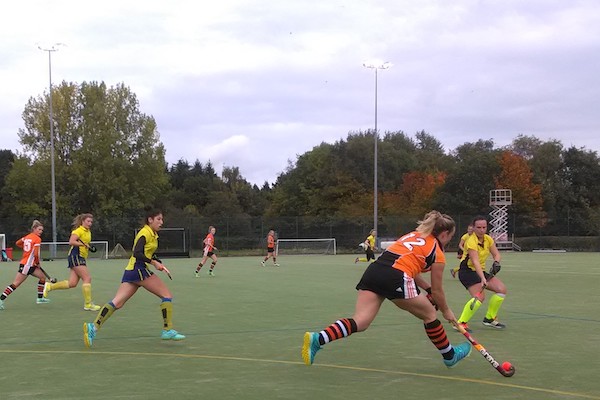 From the first whistle Wilmslow were the dominant side, putting pressure on Sale’s defence and keeping the play in the visitors’ half.

Keira Fleming’s ball down the right-hand side, found Danni Harvey who skilfully drove with pace before sending a long and accurate assist into Emilie Kelman, who gently deflected it high into the net, giving the home team an early lead.

Quick and skilful passing between the Wilmslow attack kept Sale on their toes, whilst creating multiple chances for the home side to extend their lead.

Determined to secure a convincing lead before the break, Wilmslow kept on pushing.

Their efforts were rewarded when Harvey’s powerful strike from the top of the ‘D’ shot past Sale’s keeper to make it 2-0.

Sale were keen to stay in the game, sending threatening balls through to high players, however midfielders Annika Hall and Lily Harrison were determined to prevent Sale’s desired attack.

The Wilmslow defence, however, remained focused and calm – with Hannah Kelman’s block preventing the visitors from equalising.

The home team continued to look dangerous throughout the second half, with superb attacking play from Hannah Couslon and Carla Botha.

Wilmslow kept the momentum and pressure high, creating a number of chances which unfortunately finished just wide of the posts.

Despite this frustration, they kept patient and sure enough grabbed a final and well-deserved goal; this time, Lindsay Rachubka with an impressive reverse strike on target, taking both the Sale defence and keeper by surprise.

After such a strong team performance, Wilmslow now prepare for next weekend’s fixture away against Crewe Vagrants, where they continue their campaign for promotion!

Ladies’ 2s got back to winning ways with a 2-0 victory away at Sale 2s.

Ladies’ 3s continue to be the surprise package with an accomplished win against Oswestry 1s to stay top of the table with 5 wins out of 5.

Perhaps the ladies best result was 4s winning away against Brooklands Poynton 4s, 2-0, which allowed them to climb to top spot.

A youthful fifth team had the only ladies reverse by losing 0-2 away to Oxton 4s.

Wilmslow snatched a 5-4 victory against Neston in a thrilling game at Oakwood Farm.

Wilmslow started on the front foot and looked threatening around the Neston ‘D’.

The Oranges took the the lead in the third minute when Cam Armstrong drove hard at the Neston back line and struck a stunning reverse high into the net at the near post.

David Boddy then extended the Wilmslow lead shortly after, when he took a pass from Sam Dawson and finished a flowing team.

Neston started to exert some control on the game and were looking for long balls to their forwards, and only last minute interventions from defenders Martin Wright, Ben James and Steve Edmonds stopped Neston from breaking through.

Neston struck back through a penalty flick that Simon Pickering very nearly stopped but couldn’t keep out.

There was still time for Wilmslow to make it 3-1 before half time as Robin Cooper stepped up to rifle a flick into the top corner from a short corner.

By the hour mark, Neston were level at 3-3 as 20 minutes of pressure told on the Wilmslow backline.

This focused Wilmslow’s minds, and Darryl Stocker and David Boddy combined to release Boddy through the middle.

After he was taken down by the Neston keeper, Matt Westbrook stepped up to flick Wilmslow back into the lead.

However, Neston quickly drew level after a short corner broke down and they slammed the ball home to make it 4-4.

Wilmslow refocused again and upped the pace and pressure.

Andy Hunt came to Wilmslow’s rescue with 2 minutes to go when he picked up a loose ball in the ‘D’, took on 2 Neston defenders, and slammed the ball into the top corner to make it 5-4.

Wilmslow’s loyal fans were delighted with the finale as Wilmslow moved back into the top half of the league.

For the second week running Men’s 2s found their scoring form and run away 11-0 winners against Leigh Manchester 1s.

The most disappointing result of the day was the 3s 2-5 defeat at home to Timperley 4s, after going into an early lead.

In all the men’s teams netted 29 goals in a high scoring weekend.