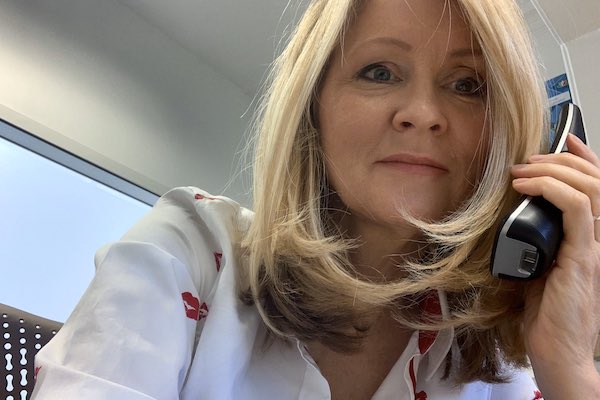 Members of Transition Wilmslow met with local MP Esther McVey this week, by Zoom, to talk about the resilience of our community and how we maintain and improve it.

In the face of unprecedented and rapid changes due to external shocks such as coronavirus and the climate emergency, how do we ensure our children are healthy and safe?

How do we make sure there will be enough to eat? How do we help people grow more food locally and make smarter choices about the food they eat?

Can we cut more plastic use, build warmer homes, and bring our peat bogs back to life?

Change for the better

Andrew Backhouse, chair of Transition Wilmslow, said: “We talked about some of the positive effects of this terrible coronavirus crisis that so many of us have noticed.

“Quieter streets, fewer cars and no plane or traffic noise so we can hear the birds sing again.

“We discussed the potential future impact of Transition Wilmslow’s plan to double tree cover in Wilmslow by 2040 and its proposal to develop a series of green safe routes to school to help children be healthier and safer walking and cycling to school as we all once did.

“Children walking or cycling to school would reduce the impact of cars in our town: fewer potholes, easier parking and less pollution.

“Cars idling outside schools are an issue that has been raised by the Climate Conscious Wilmslow group, which includes many young people and parents, with students expressing serious concerns about the amount of air pollution they are exposed to.

“Esther suggested that we work with schools to raise awareness of the pollution caused by idling engines and was sympathetic to the development of 20mph limits on key green routes.”

Wilmslow resident, Prof Sarah Bridle’s research on the climate impact of our food choices has shown that producing the food we are eating generates 25% of all greenhouse gas emissions.

An 8oz steak and chips causes thirty times more greenhouse gases than a supper of beans and a jacket potato.

Esther McVey said: “When I was a child we had a roast once a week and then, one way or another, the joint made the dinner for the next couple of days, always a homemade broth with crusty bread, then cold meat with salad and boiled potatoes.

“In fact, we ate much less meat when I was growing, had a veggie meal midweek and of course, fish on Friday! I guess I was the original flexitarian!”

She will request a debate in Westminster when possible to raise the issue of diet and climate change, will see if Parliament could be persuaded to adopt ‘Meat Free Monday’ too, and may talk to the education minister about encouraging schools to take on meat-free days.

Changes have been made in terms of the plastic bag charge and banning plastic straws, but it is not clear what has happened to a recent proposal to introduce a plastic bottle deposit scheme.

Andrew Backhouse said: “We would like the Government to follow Wales’s lead in banning single use plastics altogether.”

The government has talked about reducing the carbon emissions of new build houses but has recently slackened the controls on the environmental standards.

Florence Collier, Passivhaus consultant and member of Transition Wilmslow, said: “We need not only to tighten standards for all new build houses to zero carbon standards, but also to ensure the existing housing stock (80% of which will still be here in 2050) is retrofitted as effectively as possible.

“This will not only impact on carbon emissions but will also make houses warmer and more comfortable and reduce fuel bills. Cutting VAT on retrofits might encourage home owners and landlords to make the changes we need.”

Passivhaus is the world leading standard in energy-efficient construction: A Passivhaus requires as little as 10 percent of the energy used by typical central European buildings – meaning an energy savings of up to 90 percent.

Running costs and heating costs very low – that why it makes sense for housing to be constructed that way removing from expensive heating costs.

Esther McVey said she had been very keen on adopting Passivhaus standards on all new social housing, and Transition Wilmslow encouraged her to push for this for all houses, as well as removing VAT from retrofitting older houses to reduce their carbon footprint.

The current state of Lindow Moss – an area of international ecological, historical and archeological importance, and the burial place of Lindow Man – is an issue that exercises many Wilmslow residents.

Peat bogs, when restored, are ten times as effective as forests in absorbing carbon, can absorb water to reduce flooding, and can be an amazing source of biodiversity.

A restored Lindow Moss would be a wonderful place for all of us; for our physical and mental health and for our environment.

Pippa Jones said: “Esther really understands the importance of the Moss to us all in Wilmslow and the restoration of peatland was in the Conservative manifesto.

“We were glad she is in support of banning the sale of peat in the UK. We look forward to hearing more on this, and her taking up the issue of the Moss’s restoration with Cheshire East Council.”

Re-evaluating the lives we lead

The coronavirus crisis is making us all re-evaluate the lives we lead, and perhaps when this dreadful time is over we will emerge better placed to think about what is important in our community and what could help us to withstand future shocks.

We know that everyone wants to live sustainably but sometimes the way the world is organised makes that very difficult.

We have seen through this crisis the ability of all of us including governments to make systems change very rapidly and if we made the right changes, it might be easier for us to make the right choices for the health of ourselves and our children.

Transition Wilmslow is one of a world wide network of Transition Towns.