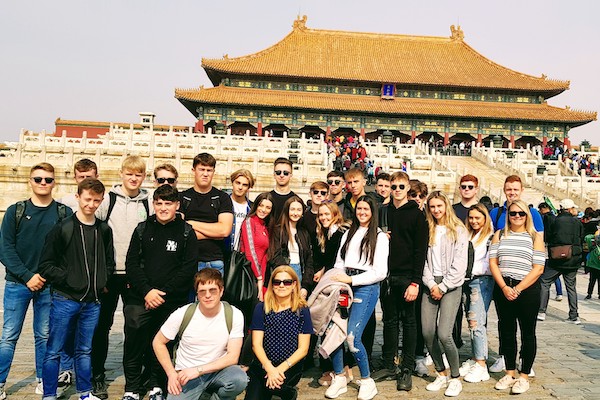 A Level business, economics and geography students at Stockport Grammar School travelled to China recently as part of their studies on trade, globalisation, urbanisation and superpowers.

During their one-week stay, the students spent time in Beijing and Shanghai visiting landmarks and attending lectures.

They also explored a section of the 13,000 mile-long Great Wall of China.

Whilst in Beijing, the students experienced the city’s local delicacies, wandered around the narrow alleyways of an ancient hutong shopping area and toured the site of the 2008 Beijing Olympics, where Team GB won 50 medals.

Students also visited a number of historic landmarks from the Ming Dynasty, including Tiananmen Square, before attending two lectures on ‘Doing Business in China.’

An overnight train then whisked the group off to Shanghai where they enjoyed a trip to the Canature water filtration company, which was established in response to the lack of clean drinking water in some parts of the country.

During their time in Shanghai, the students also visited the Chamber of Commerce and met students at a Chinese grammar school called Pudong Foreign Affair Service School.

Sixth form student Amy Gardner commented: “The culture was so different to anything I’d ever seen before and we got the opportunity to experience so much of it.

“My favourite part of the trip was the Shanghai Cruise at the end because it was amazing to see the city lit up at night.

“The lectures we attended were really informative and have definitely supported my geography studies. It was also interesting to meet a Chinese school and take part in their lessons.”

“Highlights include hiking a very picturesque section of the Great Wall of China in the Badaling province.”

Leanne continued: “The business visits and lectures were fantastic.

“They provided pupils with a great insight into the way in which businesses and the economy operates in such an interesting country.

“As a result our pupils gained a lot of real life examples which they can use in their summer exams.”