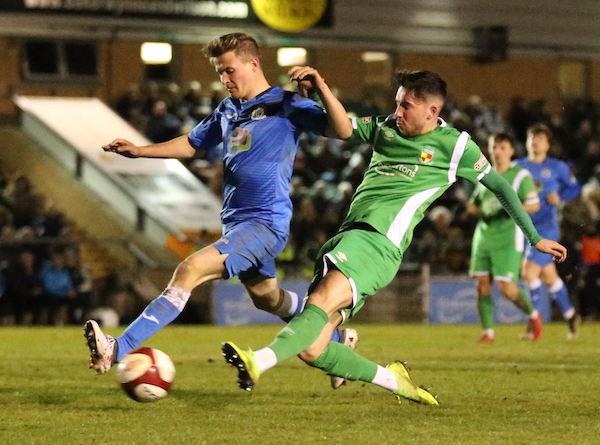 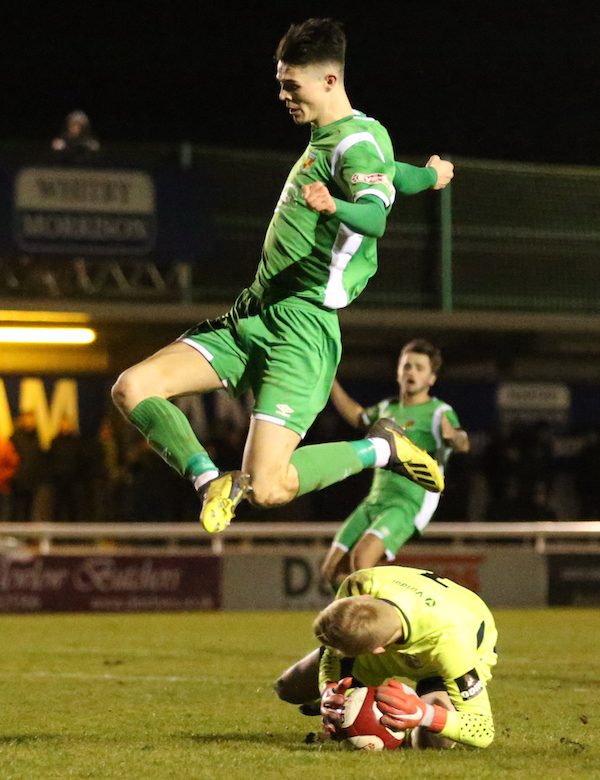 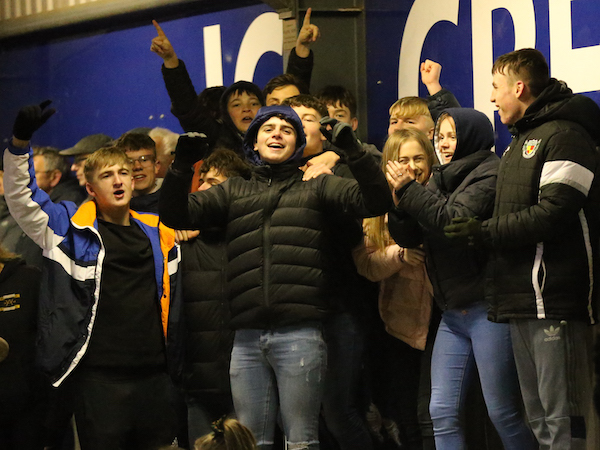 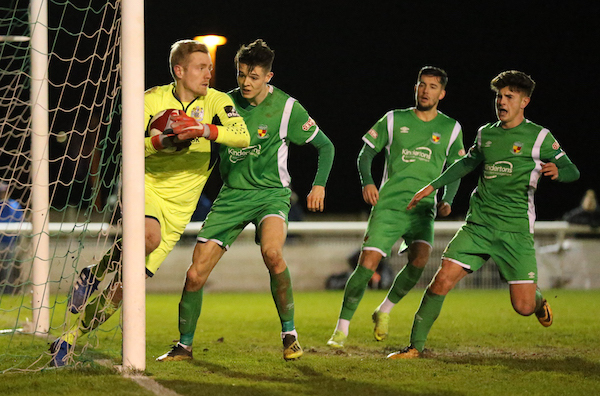 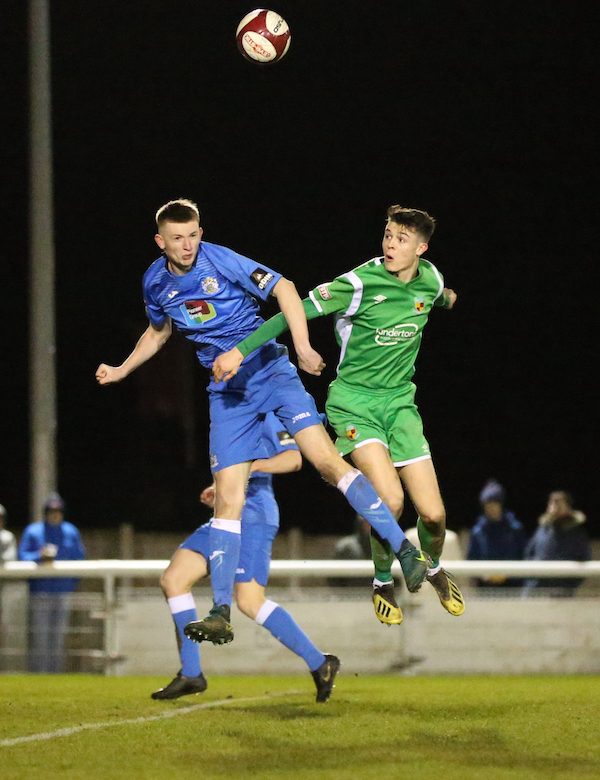 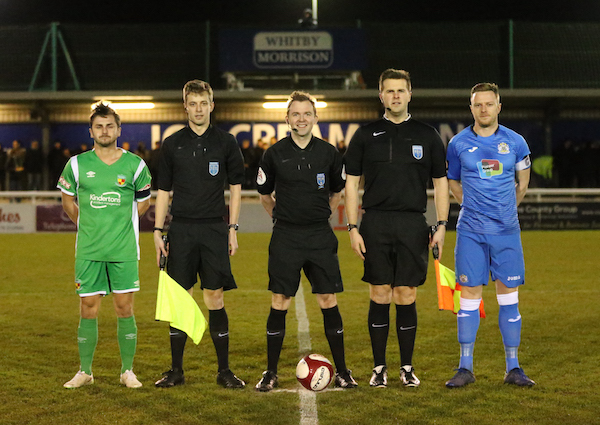 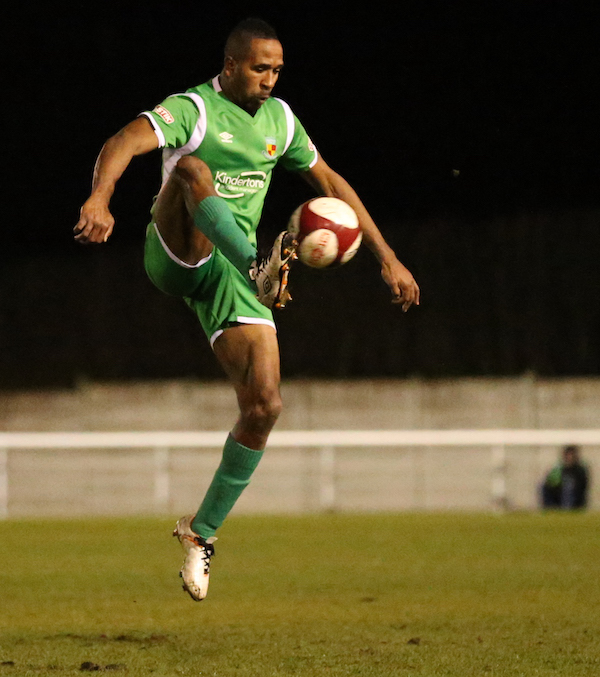 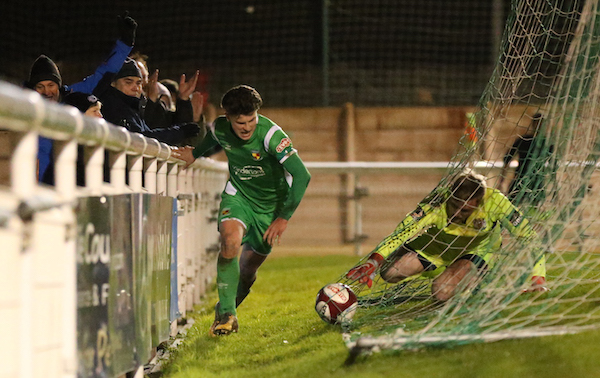 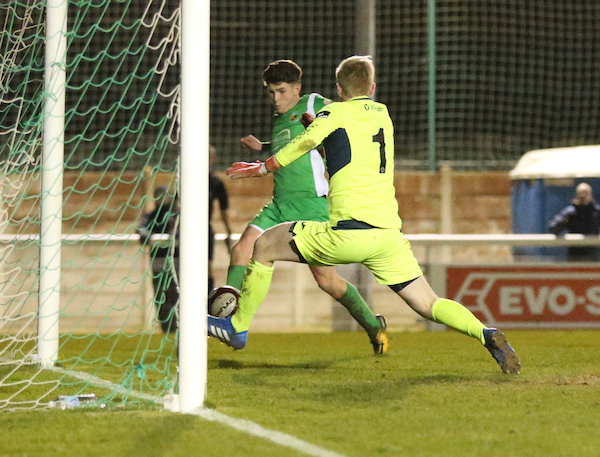 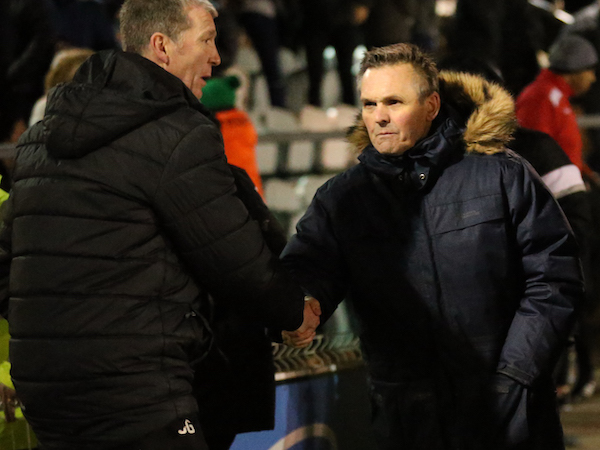 Goals from Jamie Morgan, Joel Stair and substitute Callum Saunders saw the Dabbers overcome tricky weather conditions and higher ranked opposition for the third time in this season’s competition to storm into a final against Runcorn Linnets.

Nantwich looked in the mood from the get-go with a good opening being created only four minutes into the tie, as Ricardo Fuller’s half volley was held onto by Stockport keeper Ian Ormson.

The visitors had a decent opportunity themselves on 14 minutes but were denied by a fantastic Will Jaaskelainen save following Will Holt’s well struck effort.

Nyal Bell was proving to be the main threat for Stockport and made it a difficult first half for the Dabbers full backs, breaking the offside trap to test Jaaskelainen who turned his shot behind.

Just over the half hour mark, Nantwich had a chance to take the lead however Ormson made a good save after coming off his line quickly to keep out Jamie Morgan who found himself in space inside the box.

An end-to-end first half continued as Nathan Cotterell saw a shot blocked before Bell again tested Jaaskelainen with a powerful hit from 25 yards.

Just as it was looking like the sides would go in goalless at the break, Sean Cooke fired a wonderful effort from distance which came back off the inside of the post however Morgan was on hand to turn in the rebound and give Nantwich a 1-0 lead.

It was an electric start to the second half for the Dabbers who, with the wind now in their favour, took advantage almost immediately as a Cooke corner deceived Ormson in the Stockport goal and was fired home by Stair inside the six yard box on 48 minutes.

The visitors were struggling to adapt to the conditions and almost conceded again soon after when a goalmouth scramble ensued from a Joe Malkin cross.

Caspar Hughes was inches away from prodding into the back of the net however a last-ditch clearance prevented a third.

Chances were sparse for Stockport in the second half, however Matty Warburton almost single-handedly got his side back in the game when the striker took on three Nantwich defenders but couldn’t generate enough power on his shot to beat Jaaskelainen.

The Dabbers had the chance to kill the tie off on the hour following a lovely move which ended with Fuller being tripped in the box and referee Peter Gibbons pointing to the spot.

Ormson, who impressed throughout, stepped up to keep out Toby Mullarkey’s spot kick which was at a comfortable height.

Heading into the final 20 minutes, a foul by Holt on James Lawrie in a good area just outside the box gave Nantwich another decent opportunity to put the game beyond Stockport, however Cooke’s strike on target was straight down the throat of Ormson.

With an attendance of 375 braving the cold, the Dabbers rewarded them with an excellently worked third.

Some flowing football saw Cooke play in substitute Saunders, meeting the striker’s run perfectly before he slotted into the bottom right corner.

Stockport substitute Sajjad Elhassan almost got a consolation for the visitors but Jaaskelainen was in fine form to save at his near post.

It could have been four for Nantwich after ‘Man of the Match’ Fuller robbed Jordan Downing of possession just outside his own box before feeding Saunders who struck first time but was denied by Ormson.

A well-deserved semi-final victory for the Dabbers who now return to Evo-Stik Premier Division action on Saturday afternoon with a trip to Hednesford Town (3pm kick-off).