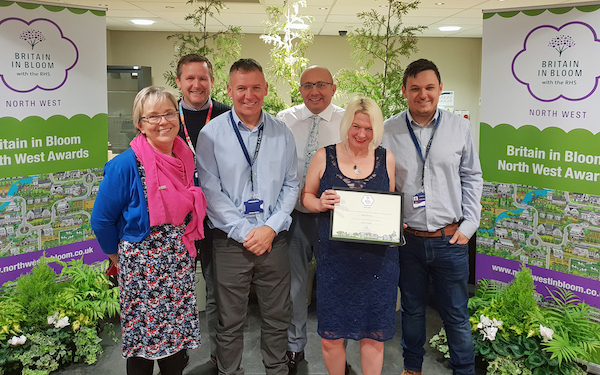 Ellesmere Port’s first entry into the ‘It’s Your Neighbourhood’ category of the North West in Bloom competition has been hailed a huge success.

The non-competitive category gave the town its first steps towards a full entry into the prestigious horticultural competition.

North West in Bloom judge Julie Livesey visited the town in July to assess the work completed so far.

At a ceremony at the Southport Convention Centre, representatives responsible for the town’s entry heard they had been awarded a ‘Level 4 – Thriving’ award.

Cheshire West and Chester Council’s cabinet member for environment, and mayor of Ellesmere Port, Cllr Karen Shore commented: “Many groups have joined in from all over the town.

“I’m delighted the official grading of our first entry in North West In Bloom has provided recognition for all their hard work and the wonderful results that are being achieved.

Cllr Shore added: “The ‘It’s Your Neighbourhood’ category is all about bringing members of the community together to make a positive change to the place they live, work or spend their leisure time.

Groups participating in the campaign are asked to focus on its three key themes of: Community Participation, Environmental Responsibility and Gardening Achievement.

Cllr Shore continued: “I would like to thank the businesses in the town centre for their support, our StreetCare teams, everyone at Trinity Church, as well as Cambridge Road and William Stockton Primary Schools, plus everyone else who was involved in this year’s Ellesmere Port in Bloom submission.”

The success of this year’s entry means the town can now progress to a full North West in Bloom entry in the future.