Crewe Audi’s Natalie’s has the ‘Spirit’ 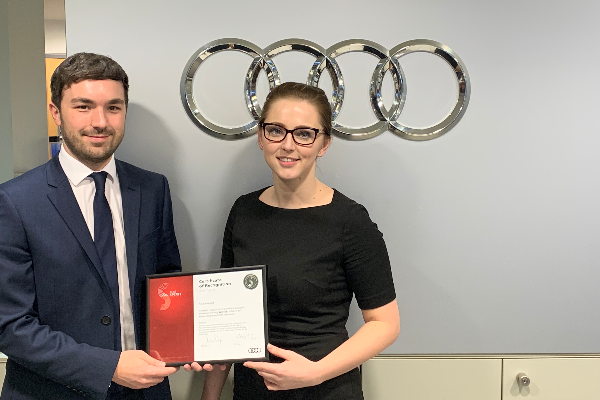 She has been awarded the much coveted ‘Audi Spirit’ award.

Natalie, who has been at Crewe Audi for almost 2 years, insists she was only doing her job.

One of her customers, however, thought she’d done so much more.

There was a rather unexpected surprise waiting for the customer when he brought his Audi Q7 in for its first MOT, service and warranty check: a problem with the brake master cylinder, meaning the car was not safe to drive.

The customer was understandably panicked, with a large family to ferry around and a holiday, travelling in the car, just days away.

Natalie worked hard to make sure everything was sorted. She explained: “I could appreciate this was all a bit of a shock and a nightmare for the customer, who had no idea his car had a fault, never mind one which meant it couldn’t be driven.

“He’d told me that he had a large family and that was why he needed the seven-seater Audi Q7.

“I ordered him a taxi to get home and made sure that his replacement car was a Q7 so there’d be no horror stories on the school run!

“Then I set about expediting the parts arriving at the centre and being fitted to his car, which meant he was able to collect it and take his family off on holiday, just as he’d planned!”

Natalie concluded: “I really just saw it as doing my job, but it’s lovely when you receive a compliment from a customer and then to be given the ‘Audi Spirit’ award was the icing on the cake!”