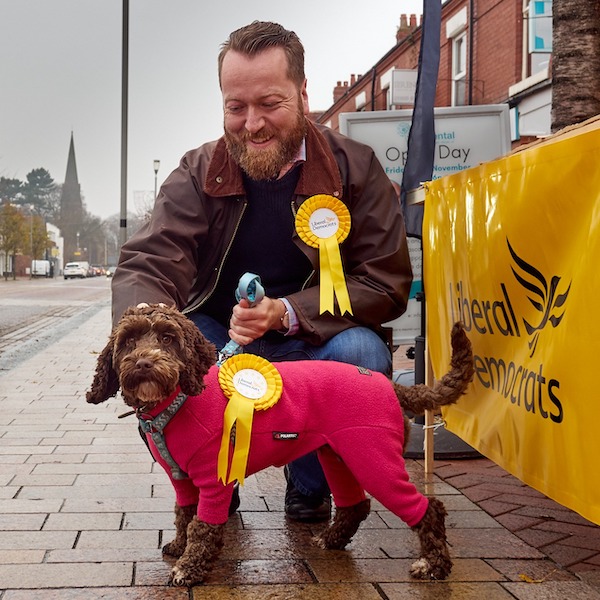 In this article, we speak to Neil Christian, standing for the Liberal Democrats in Macclesfield.

To champion the vulnerable and fight for an economy and society that works and provides for everyone, that takes its responsibility to the environment and future generations seriously, to change things for the better.

I want to be a citizen of a country that is internationalist in outlook, gives its people the chance to succeed and properly protects the disadvantaged.

This is the most important election in my lifetime. I’ve been a Liberal Democrat member since 1999 and have always taken a keen interest in politics.

I stood in Macclesfield in 2015 and am committed to transforming this constituency and our country for the better.

There was no doubt in my mind that I had to stand in this election as the outcome will shape the future of our Country for generations.

The next government will take decisions on Brexit that effect the success of our economy and likely decide the fate of the United Kingdom.

More importantly the next government will have to deal with the climate emergency that threatens the future of our planet.

I am really concerned about air pollution locally and throughout the constituency.

There has been a campaign to highlight the pollution on the A6 through Disley and Newtown drawing attention to the high levels of nitrogen oxides near the village centre.

The number of Diesel heavy lorries using the A6 has significantly increased since the A555 Airport link road opened.

Local residents’ complaints have so far fallen on deaf ears. I am determined to do something about the pollution and congestion, this situation cannot continue as it has.

We forget that air pollution is a killer. It contributes to 40,000 premature deaths a year and costs the NHS £15 billion.

The Liberal Democrats will pass a Clean Air Act, based on World Health Organisation guidelines, enforced by a new Air Quality Agency, enshrining the legal right to unpolluted air wherever people live.

We championed reducing carbon emissions in government and cutting dependence on fossil fuels.

In government the Liberal Democrats will pass a Zero Carbon Britain Act to set new legally binding targets to reduce net UK greenhouse gas emissions to zero by 2045, and work within the EU to set binding targets for a net-zero emissions.

The reason why this election was called was the chaos caused by Brexit and the inability of the government to deliver what they promised. If elected I will fight to remain in the EU.

Three years of uncertainty and argument has caused unquantifiable damage to our economy. The last three years have just been the agreement to leave, we still have to negotiate a trade deal.

Remaining in the EU is the best framework for working effectively with our neighbours in the pursuit of our shared aims.

It has led to greater prosperity, and protection for British jobs and public services. There is no better deal to be had.

The National Institute of Economics and Social Research predicts that the Prime Minister’s deal will lower GDP by 3.5%, making us £70bn poorer each year.

It is clear there is no better deal available than staying in the EU.

Growth in the economy has slowed, manufacturers and banks have already left the UK, and the government is already borrowing billions more to fill the gap caused by lost tax revenue.

Urgent problems, such as the NHS crisis and climate emergency, are being neglected because of the mess. Every vote for the Liberal Democrats is a vote to stop Brexit.

The Liberal Democrat manifesto is a bold vision for our country. I’m very proud of it.

We have a radical credible plan to tackle the climate emergency. By 2030, 80% of our electricity will be from renewables.

We will lift millions out of fuel poverty by insulating their home in the next five years. We will plant 60 million trees a year and help the restoration of other natural carbon sinks such as peatlands.

Our NHS will be funded so it is fit for the 21st Century raising £7 billion a year ring-fenced for the NHS and social care services by adding a penny on income tax.

On top of this, a £10 billion capital fund to upgrade equipment, ambulances, hospitals and other NHS buildings.

We will build a brighter future for every child. Provide 35 hours a week of free, high-quality childcare for all children aged 2-4, and for children with working parents from 9 months.

Provide an emergency cash injection of £4.6 billion, giving schools the same spending power that they had in 2015, and recruit 20,000 teachers.

The Liberal Democrats demand better than what has gone before, and in Government would strive to build a brighter future.

I work as a barrister in Manchester and across the north west, specialising in family law and child protection.

Representing people, identifying the central issue and sticking up for people is part of my day job. I enjoy getting things done and helping people in difficult times.

I am 38 years old. I grew up in the Isle of Man and studied mediaeval history at St Andrews University in Scotland before moving to London to take my bar exams.

I have lived in Cheshire for almost 15 years and know the area and the issues affecting it.

In my spare time I enjoy classical music, playing both the oboe and piano. I love spending time walking in the hills in Snowdonia and the Peak District, and am a keen skier.