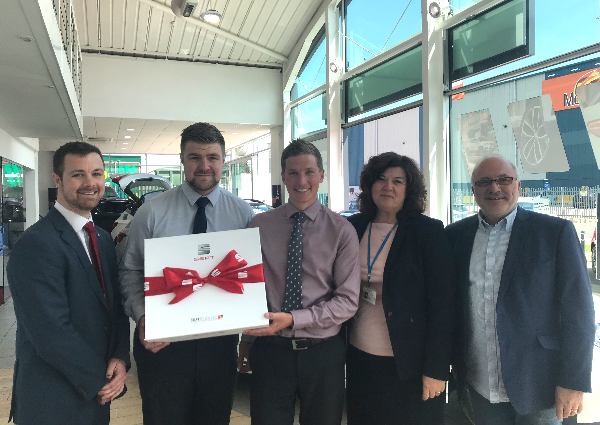 It’s been a busy month for staff at Crewe-based motoring giant Swansway, with staff at the Crewe SEAT dealership and Swansway Accident Repair Centre advancing themselves professionally. 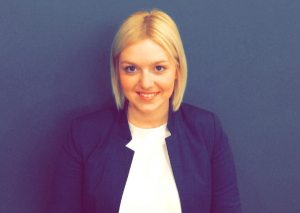 This would be an accomplishment in itself, but Izzy has done something truly sensational – she’s sold the most cars a trainee has ever sold, not just for Swansway, but across all of Calibre’s trainees.

She’s up to 70 cars already – so buyers beware if you’re on the end of her sales pitch, it sounds like you won’t be leaving the dealership without making a purchase!

Sabrina Hegarty, managing director of training provider Calibre Group, commented: “Izzy has broken the record, no other trainee has ever sold this many cars during training. I’m so impressed and very proud of Izzy’s achievements; she’s a superstar in the making”!

Izzy’s Calibre mentor David McKinlay was equally delighted, commenting: “All Izzy’s work was excellent and she demonstrated a real clear understanding throughout the course.” 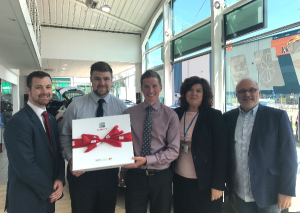 As well as Izzy’s success, Crewe SEAT is celebrating becoming only the second SEAT retailer in the UK this year to have both its sales manager and aftersales manager fully SEAT qualified – quite an achievement, according to Swansway bosses.

SEAT people development consultant Tom Broom commented: “It’s such a pleasure to see people achieve their potential and particularly pleasing when you think that Luc and Shane’s achievements have made Crewe SEAT one of only five dealers in the UK to have double accreditations in sales and aftersales managers; well done guys.”

Sales manager Luc Woolcombe has been with Swansway group for 8 years, starting his career as a sales executive.

Crewe SEAT brand manager, Andrew Barnes said: “It’s great to see members of our team grow and progress; Luc and Shane are two very focussed young men and they should be very proud of their achievements.” 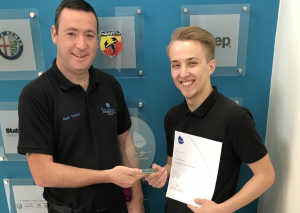 Capping off a successful period at the motoring giant, apprentice Damian Jurak who works at the Swansway Accident Repair Centre on Gateway in Crewe, is celebrating being named Volkswagen Group Apprentice of the Year.

Damian joined Swansway in November 2015 and his boss, accident repair centre manager Mark Trevers, commented: “I’m so delighted for Damian, he’s a hard working lad who really deserves this award and it’s to his absolute credit that all his hard work has paid off.”

The competition takes place across the whole Volkswagen UK network, starting with 500 apprentices. They’re then whittled down to twenty-four.

Candidates have to sit written exams and undertake practical tests and at the end of it all, Damian was announced as the winner.

Damian said: “For the final I went down to Babcock in Milton Keynes, did my practical test and finally was announced as the winner!

“I want to say a massive thank you to everyone at the accident repair centre, but I really want to thank Sean Thomson, he’s been my mentor and taught me so much.”

Swansway group director, David Smyth added: “This is such a great achievement, not just for Damian, but also for Swansway.

“It shows that we nurture talented youngsters and give them the support they need to reach their potential; Damian is a brilliant example of this and we’re all extremely proud of him.”