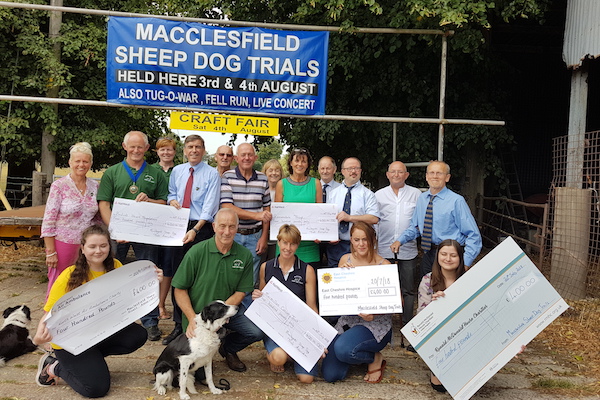 Following this, Mr Rutley was also pleased to help distribute a share of £2,400 to six local charities, thanks to the generous and active fundraising from Macclesfield Sheepdog Trials Association.

Each charity received a cheque totalling £400.

David, who is patron of the Macclesfield Sheepdog Trials Association, took the opportunity to thank representatives from the recipient charities present for the vital work that they undertake in and around local communities.

All the funds donated were generated by the raffle that was held at last year’s Macclesfield Sheep Dog Trials.

This year’s event (taking place on 3rd, 4th and 5th August) is once again being held at Sutton Hall Farm.

Competitors from all over the UK and abroad will be taking part, earning points which may enable them to go onto the national championships.

As well as impressive sheepdog displays, there will still be a tug-o-war, BBQ and beer tent on the Friday, plus a craft fayre and fell race on the Saturday.

The ever-popular closing concert, compered by Norman Prince, will take place on the Sunday evening.

Speaking after the cheque presentation, David said: “It was an honour to once again help present the nominated charities with the funds generously raised at the Macclesfield Sheepdog Trials.

“As well as being a great day out and a popular fixture of the Macclesfield calendar, the Sheepdog Trials help to raise funds to support the important work that these organisations undertake in and around our local communities.

“I hope that as many local residents as possible will attend the event and give their support to this great local tradition.”

Further details can be found online at: www.macclesfieldsheepdogtrials.co.uk