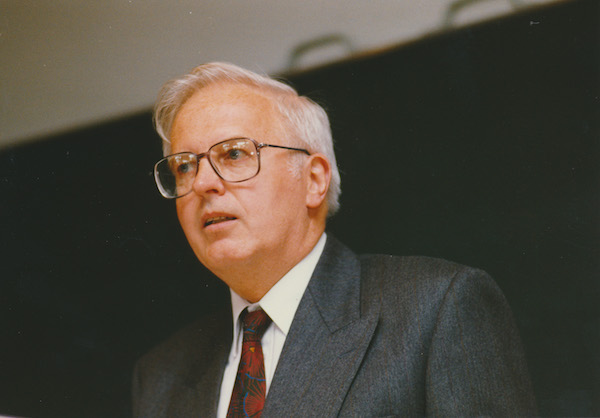 (image: Alan receiving an honorary doctorate from the University of Kiel in Germany)

Professor Alan Pearson has died at the age of 84, following a short illness.

Among many other things he was formerly a chair of The Wilmslow Civic Trust, and was well-known locally.

Professor Pearson’s family has written the following tribute, with details of his funeral which will take place at St Philip and St James Church in Alderley Edge.

“Beloved husband of Marianne, father of Carol, Michael, John and Mark by his first wife Irene (deceased 1986), and devoted grandfather, Alan will be greatly missed by his family, friends and former colleagues around the world.

“His distinguished career in academia included Dean of Faculty at Manchester Business School and Founding Chair of RADMA (Research and Development Management Association), a role which he stepped down from after 50 years at the age of 80.

“Alan was highly committed to the many roles he took on in his rich life. His numerous voluntary activities included youth leader and elder at his local churches, Treasurer and Chair of Croftside Tennis Club and Chair of The Wilmslow Civic Trust.

“He was also a governor of Manchester High School for Girls for many years.

“Alan was an active sportsman throughout his life playing competitive table tennis and tennis and was a keen cyclist in his early years.

“His warm sense of humour and caring for others touched countless hearts and inspired many to great achievements.

“All who knew Alan or his family are welcome to attend. Family flowers only. Donations to The Christie Charity.”