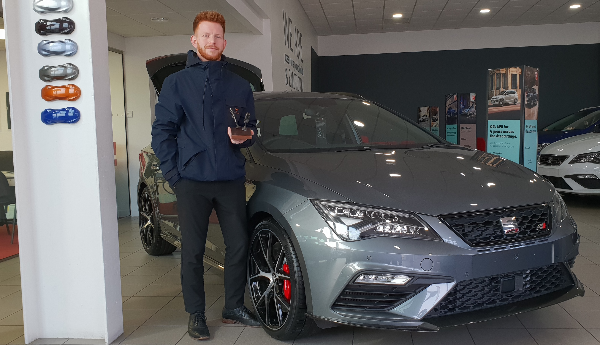 SEAT has launched its first car from the CUPRA brand, the CUPRA Ateca, and Crewe SEAT sales executive Kallum Allcock was invited to Barcelona to the launch of the first stand-alone CUPRA model.

Kallum was clearly taking notice throughout the weekend as he went on to win an award from CUPRA for having some of the best product knowledge among the UK delegates.

A delighted Kallum commented: “What an amazing trip!

“We seemed to cram an awful lot into a short time and being driven around the Circuit de Catalunya by Pepe Oriola in a TCR race car was definitely my highlight! Just, wow!”

The icing on the cake for Kallum was winning the CUPRA product knowledge award, which was presented to him by Pepe Oriola.

The award itself is made from a valve taken out of the TCR CUPRA which took part in the Portimao 24 hour race in July.

“It was great to win and the award itself is pretty amazing,” added Kallum.

“CUPRA have gone out of their way to make sure that sales executives are really immersed in the brand and its core values. I’m not going to forget this experience for a long time.”

Kallum – who lives in Crewe and joined Swansway Motor Group, which owns Crewe SEAT, in April 2017 with no motor trade experience – is now back to his day job and looking forward sharing his knowledge with his first customers for the CUPRA brand.