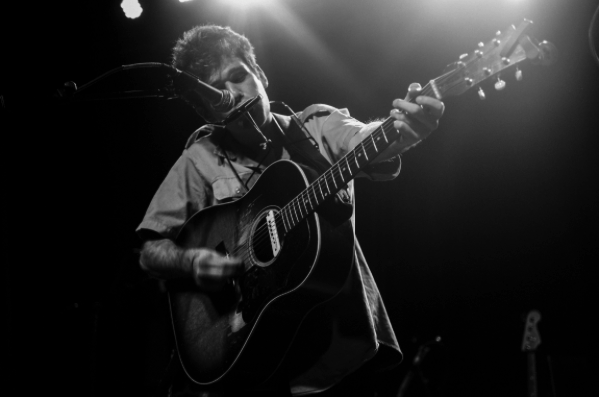 Outspoken protest singer (in the vein of Bob Dylan or Woody Guthrie) Josh Okeefe will be performing tracks from his forthcoming album at Middlewich FAB Festival this year.

His set will include the moving ‘Grenfell Tower Fire’ which follows on from his emotional performances at Grenfell Tower’s Wall of Truth – a public space collating first hand accounts, facts, testimonies and statements created by, and for, members of the community affected.

Often compared to the likes of Dylan and Guthrie, fans say Josh Okeefe is a worthy bearer of the torch lit by the folk legends who’ve gone before him.

Like his heroes, Josh is an artist who prefers to let the songs do the talking – he’s said to be an enigmatic character with a penchant for the unpredictable.

He dropped out of school and travelled from Derby (UK) to Nashville (Tennessee) in 2012 to pursue his dream of becoming a songwriter – and he hasn’t looked back.

Josh became a regular in the rock and roll clubs on the east side and the legendary honky-tonks on Lower Broadway, he met a host of other musicians and began writing songs at an astonishing pace.

He has since collaborated with stars including Alison Krauss and Jamey Johnson.

Turning heads with his first tour of the UK last summer, Josh is returning again after a year of near-constant travelling across the USA.

Josh said: “There ain’t nothing better than playing music for folks, especially in the UK.”

Those who have seen Josh performing in the flesh will know to expect a stripped back acoustic set with an electric atmosphere, supercharged by Josh’s emotive songcraft.