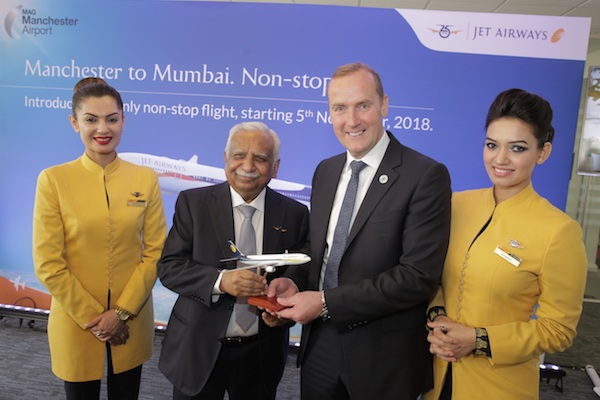 The North’s first ever direct service to India’s largest city has been hailed as a milestone in the UK’s relations with one of the world’s most important economies.

Jet Airways has announced that it will begin flying from Manchester to Mumbai later this year, with the route tipped to deliver a major economic boost to the northern economy.

The four-times-a-week service will put business and leisure passengers across Manchester Airport’s catchment area within easy reach of the world’s fastest-growing economy.

It will deliver a boost to the more than 500,000 people of Indian origin living across the North, with the service set to go live ahead of the annual Diwali festival.

Bosses at Manchester Airport say the route will open-up to the North to millions of Indian tourists, who will be attracted by its sporting cultural and natural assets.

The news has been welcomed by Secretary of State for International Trade.

Dr Liam Fox said: “From Manchester to Mumbai, Jet Airways’ only direct route between the North of England and India will strengthen connections between two major global cities and the wider Northern Powerhouse.

“More than a hundred Indian companies are based in the North West alone and this route will further trade relations worth £18bn between the world’s largest and oldest democracies.”

Jet Airways will initially fly from Manchester to Mumbai on Monday, Thursday, Saturday and Sunday and will operate an A330-200 (with 254 seats) on the route.

There are already more than 100 Indian companies with bases across the North and India is one of the UK Government’s top target markets for foreign direct investment.

Manchester Airport CEO Andrew Cowan commented: “Securing a direct service to one of India’s major cities is the product of a lot of hard work over a long period of time to forge closer ties between Manchester and this globally significant economy.

“We have worked, along with a range of partners, to create a compelling case for why our city – and the wider North – is a great place to visit, invest in and do business with.”

He added: “Direct connectivity to the world’s most important markets is key to creating a prosperous and internationally competitive northern economy, and a balanced and outward facing UK.

“This route will deliver a major boost to businesses looking to export to the world’s fastest-growing economy, as well as helping to attract Indian visitors and investors to the North.”

Vinay Dube, CEO of Jet Airways, added: “We are extremely pleased to begin a new chapter in our decade-long relationship with the United Kingdom.

“The new service will bring Manchester into our global network, reinforcing our footprint as well as expanding the choice of connectivity to/from the United Kingdom for our guests with the four day/ week, non-stop service.

“With the new flight, Jet Airways will have over 8,000 seats on offer every week, making it increasingly convenient for both business as well as leisure travelers, travelling between India and the UK, deepening commerce as well as tourism ties between the two countries.”

Flights start on Monday 5th November with return economy fares from £400, and business class from £2,300.