Crewe SEAT’s Richard is ‘the business’ 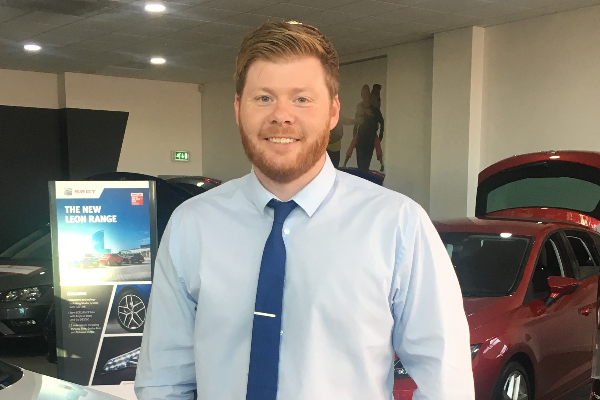 The 33-year-old, living in Middlewich, has already led an exciting life prior to starting his new role, having previously lived in Canada organising skiing and snowboarding lessons.

Richard explained: “I’ve always been sporty, my first job at 16 was as a lifeguard, so when the chance came to move to the side open spaces of Canada, I took it.

“When I returned to the UK I began working in the motor trade and found that I really enjoyed it.”

He continued: “I was aware of Swansway Motor Group and I was impressed as friends who’d bought cars from Crewe Volkswagen and SEAT and been really happy with their Swansway experience.

“When I was searching for a new challenge I thought Swansway would be a good place to work and was fortunate that they were recruiting; the rest is history!”

Richard is looking forward to learning more about the SEAT brand and helping customers find the best way to finance their new car.

When he’s not at the Third Avenue dealership, he’s a busy man – married with a baby daughter, Richard is still sporty, finding the time to mountain bike, snowboard and take part in motor racing.

He said: “I have two ambitions; one is to be the best business manager in Swansway Group and the second is to teach my baby daughter to snowboard!”