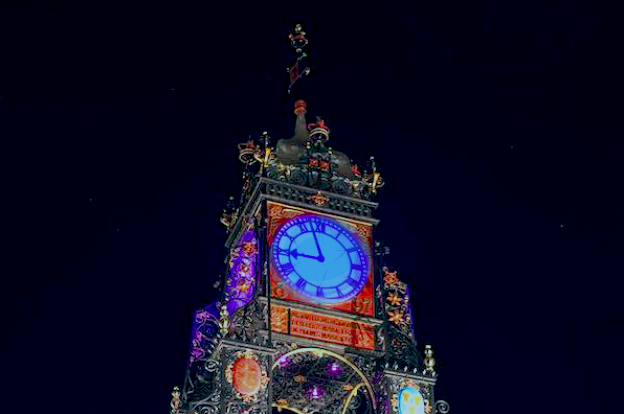 Chester Town Hall and the Eastgate Clock will be joining iconic landmarks across the country to wish the NHS a happy 70th birthday tomorrow (Thursday 5th July).

The NHS was launched by the then health secretary Aneurin Bevan at Park Hospital in Manchester (known today as Trafford General Hospital) on 5th July 1948.

For the first time, hospitals, doctors, nurses, pharmacists, opticians and dentists were brought together under one umbrella to provide services, free of charge at the point of delivery.

Cllr Bob Rudd, chairman of Cheshire West and Chester Council commented: “We are delighted to be involved in this national celebration, where the country is marking the founding of the NHS.

“The NHS has been involved in much more than providing health care, it has played a major part in tackling many diseases such as polio as well as helping pioneer new medical treatments.”

Cllr Black continued: “I would like to encourage any churches, mosques, historic buildings and homes, village halls and any other buildings across the borough to get involved and light up blue, if they have the facilities to do so.”

He added: “We will be keeping the Town Hall and Eastgate Clock blue for a few nights to give people a chance to see them and take photographs.”

The Eastgate Clock is lit with LED technology, so it’s quite easy for the Cheshire West and Chester Council street lighting engineers to alter the colour.

For Chester Town Hall they can swap lamps and add blue filters to the front of the lighting units.

Both iconic structures have previously turned green to support a local cancer charity and pink for Breast Cancer Awareness week, the lights have also been switched off for Earth Hour.

In February, they turned purple to mark the city achieving Purple Flag status.