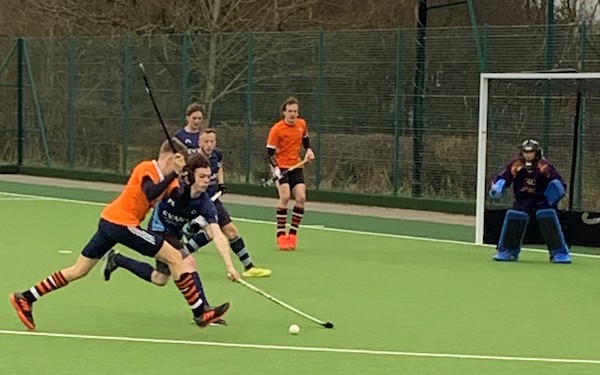 Wilmslow travelled to Sheffield for the second consecutive week, but this time came back with all three points against Sheffield’s number two club side.

The men in orange started slowly and neither side could grab control of the game in the first 10 minutes.

Wilmslow took the lead after a series of short corners when Tom Davenport slipped the ball in at the near post after Martin Wright’s initial shot was saved.

Wilmslow used this a springboard to get into their stride and began to dominate with their aggressive pressing helping to repeatedly win the ball in dangerous areas.

Wilmslow extended their lead twice before half time, firstly when Joe Booth finished smartly at the back post, before Pete Hallinan dispatched a penalty flick after Wright’s goalbound shot was illegally blocked.

Sheffield found their rhythm after half time, and after a short succession of corners reduced the deficit with a smart finish across goalkeeper Simon Pickering.

Pickering made a sharp save shortly afterwards but could do nothing to stop a rapid deflection from Sheffield’s captain from flying into the top corner as Sheffield closed the gap to just one goal.

Wilmslow took the time to regain their composure and began to control the game again, and put the result beyond doubt then David Boddy tapped in from close range after good work by Jack Wright on the counter attack.

Wilmslow saw out the rest of the game comfortably and now look forward to their final game of the season this weekend at home to Durham University in a 1.30pm start at WHC.

The Orange-tops’ second team got off to a good start against Blackburn & Clitheroe 1s. 2-0 up at half time they appeared to be cruising.

Frustration built up in the second half, with many missed chances and eventually Blackburn pulled one back.

To the crowd’s disappointment right at the end of the game the visitors got an equaliser, score 2-2.

The Men’s 3s recorded the club’s only defeat of the day (2-4) at the hands of Bebbington 2s.

Wilmslow were able to take only a bare squad of eleven on the long and taxing journey to Northumberland.

In spite of this Wilmslow started the stronger side and went ahead with a goal from Lindsay Rachubka from open play.

Morpeth scored  to equalise with a well worked goal but  the ladies in orange went in at half time feeling confident despite the cold, windy conditions.

The second half started well for the Orange-tops. Youngster Kat Haraldsdottir gave Wilmslow the lead, her first goal of the season.

Carla Botha then scored from a penalty corner and Wilmslow continued to dominate with a comfortable two goal lead.

Great distribution from the back and  good attacking play continued.

In the final minutes, however, a lapse in concentration allowed Morpeth to pull one back.

Morpeth then changed their formation pushing all players forward, and they scored to equalise just before the final whistle.

Although the game ended in a draw the women in orange should be very proud of a well disciplined performance.

Elsewhere the Women’s 4s went back into second place, having put Wrexham 2s to the sword (9-1) and the 5s had a good (4-3) win against Golborne 3s.