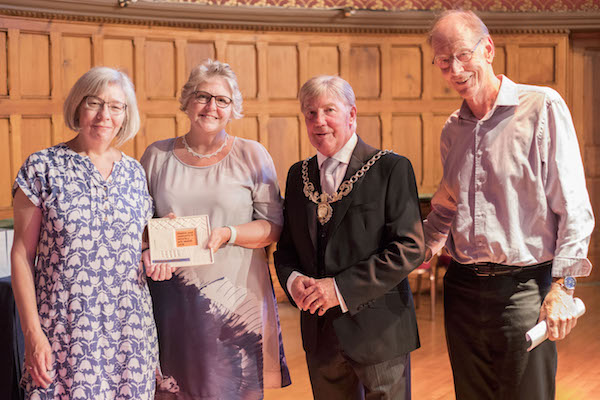 Local arts group Visual Arts Cheshire has received a prestigious award in recognition of the projects and exhibitions it has delivered over the last year.

Visual Arts Cheshire was recognised for its community arts projects including the summer Northwich Art Trail, Heritage Open Day events, and exhibitions at Weaver Hall Museum amongst other events.

The group was also commended for its work with college students and a set of workshops being held at Turning Point, while special reference was made to its Children’s Art Trail too.

This involved the participation of over 1,000 primary school children and led to their artwork being featured on the walls of the Northwich subway at the completion of the trail.

Visual Arts Cheshire chairman Alan Carr was delighted to accept the award on behalf of the group.

He commented: “This is a prestigious award and it’s such an encouragement to us all that that the Voluntary Arts Network recognises the hard work that our volunteers have invested in our many projects, all of which are intended to benefit the community.”

Fellow members of the committee – Gill Snowball, Sophie Kelly, Dave Atherton and Phil Carswell – were also in attendance at the award ceremony in Chester.

Visual Arts Cheshire won’t be resting on their laurels now, however, as it has two projects running over the next couple of months for Northwich visitors to enjoy.

“It’s the result of artists’ visits to the Chester Records Office where they found inspiration from the huge variety of material in the archives.  It runs until Sunday July 15th so you’ve got plenty of time to check it out.”

He continued: “The 7th annual Northwich Art Trail returns this July too and we’re really excited about it. Over 130 pieces of art from 60 artists can be found in shop windows throughout Northwich from Sunday 1st July.”

Visual Arts Cheshire will have a temporary base during the month in the old Adam’s shop in Witton Walk.

For more information about Visual Arts Cheshire and the many projects it delivers throughout the year, check out their Facebook page.