Spring into the Wilmslow Running Festival 2020

With spring around the corner, it can only mean one thing… it’s the Wilmslow Running Festival!

Building on the success of 2019, race organisers have dispensed with tradition and developed the event to become the Wilmslow Running Festival.

For the second year, the race includes The Stowe Family Law 10k, and the Running Bear Fun Run. The latter of these is a run of just under two miles, and will be packed with stars of the future!

At the centre of the spectacle is the ever-popular Waters Wilmslow Half Marathon, which includes the Porsche Corporate Challenge.

Rarely do we have on our door step a day that unites thousands of athletes which – when added to a support crew of hundreds plus spectators in their thousands – swells the population of Wilmslow by almost 10,000 people on race day.

Wilmslow will come close to a standstill for a short while, save for the thousands of athletes who will be either racing for medals, or pounding the streets to support their chosen charities.

Over £1 million has been raised for great causes in the last ten years, and the race itself is organised entirely by volunteers and is a charity itself. 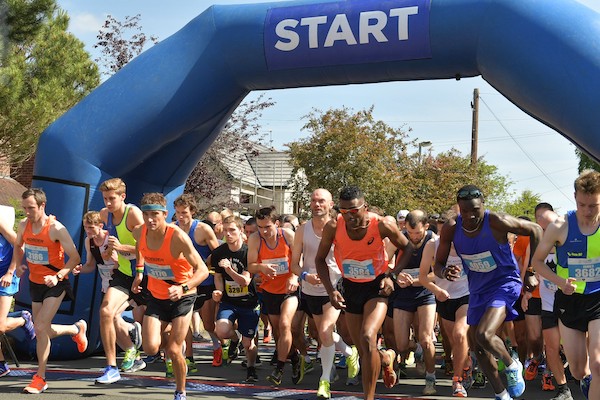 The races starts at 10.30am, with the fun run following some fifteen minutes later.

There are a limited number of race places still available, but organisers do recommend any late entries to be made ASAP. Numbers are once again up on previous years.

The community is at the heart of the day, and this year welcomes a festival village at Race HQ (Wilmslow Rugby Club) with real ale, artisan food and coffee plus much more besides.

A variety of top sports brands will also be there, highlighting the best of Wilmslow – and not just the runners!

So Cheshire will also be present on the day, adding some extra fun to an already action-packed morning!

The race organisers wish to stress a few points:

This year the chosen lead charity for the race is The Christie Charity, with the local charity being Supportability.

The race organisers are as always grateful for the support provided by lead sponsors Waters, and also to Running Bear of Alderley Edge, Porsche Centre Wilmslow and Stowe Family Law.

As always, please be aware that a closure will be in force on the day covering all roads in the Kings Road / Altrincham Road area, and on the course itself as it winds towards Mobberley before heading back to finish on Morley Road in Wilmslow.