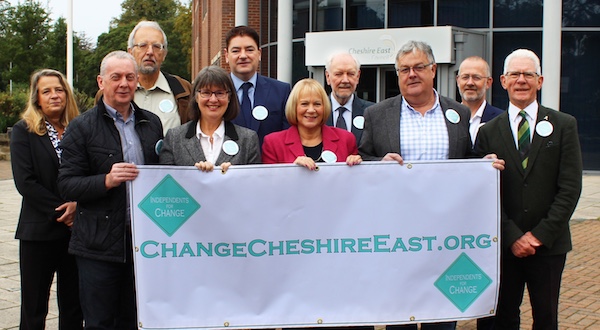 Members of the Independent Group of councillors at Cheshire East Council are seeking residents’ backing to change the way the council is run.

Having had previous attempts turned down by members of the ruling Conservative group of councillors, the Independent Group councillors are now asking residents to help them demand change at Cheshire East.

Cllr James Nicholas (Bollington) explained: “We are launching a petition calling for change to a more open, transparent and democratic, committee-led system.”

Cllr Nicholas continued: “This would mean that ALL councillors are involved in the important decisions, not just a select few members of cabinet.

“We are appealing to residents’ to support this petition to make the leadership of the Council sit up and listen.”

If more than 5% of voters in Cheshire East sign the petition (approximately 15,000 people) then a local referendum on the issue can be demanded.

The referendum would likely be a choice between the existing cabinet-style system and a new committee-led system.

Cllr Arthur Moran (Nantwich), leader of the independent group, commented: “One of the many problems with the existing cabinet system is that it puts too much power in the hands of too few people.

“Cabinet consists of just EIGHT councillors, all of whom are selected by the leader and are from the same [Conservative party] political group. They regularly hold meetings in private.”

The Change Cheshire East campaign will run for a period of six weeks – up until 11th November.

Any Cheshire East resident can sign the petition at www.changecheshireeast.org provided they are aged 18 years or over.

Cllr Craig Browne (Alderley Edge) said: “Our campaign is not party-political; it just aims to make sure that whichever group controls the council next May is forced to act in a more open, transparent and democratic way.

Cllr Browne added: “The ongoing issues at Cheshire East have had lots of press coverage, but the closed-style cabinet system is largely to blame for these issues arising in the first place.”

The petition can be found online at: www.change.org/p/changecheshireeast

Pictured above: independent councillors of Cheshire East Council, outside Westfields.