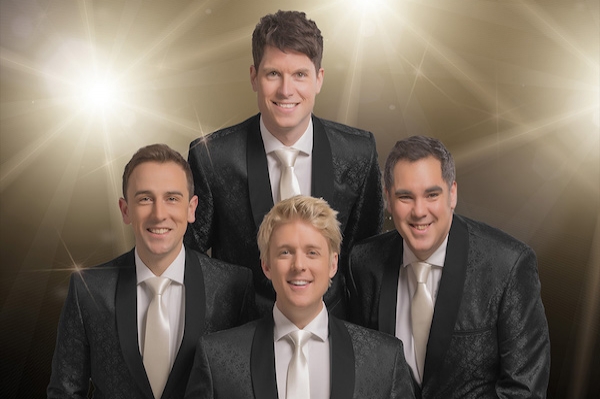 After the recent success of their sell-out Christmas tour, multi-platinum selling vocal harmony group G4 will be back on the road in 2018 and are visiting Crewe Lyceum Theatre on Tuesday 6th March 2018.

G4 exploded into the industry and the public’s hearts back in 2004 on the first series of The X Factor.

They continue to blow people away, year after year, with their unique style and impactful harmonic vocals.

Having recently made their debut in Asia, the quartet’s members (Jonathan, Ben, Mike and Nick) are delighted to have more tour dates than ever in 2018 and say this is set to be their best show yet.

Audiences can enjoy their classic renditions of Bohemian Rhapsody, My Way, Nessun Dorma and Creep plus recent heart-stopping tracks from their latest album.

VIP tickets are also being made available. These provide a pre-show meet and greet which includes a private performance from G4, where you’ll be served a glass of wine and have the chance to meet them, take photos and get your autograph book signed.

G4’s cover of Bohemian Rhapsody became their signature tune, storming the charts in 2005.

Their eponymous debut album went straight to number one, selling more than 245,000 in the first week, making it the fastest-selling album of the year.

Tickets are available now from www.G4official.co.uk or from Crewe Lyceum Theatre. Please call 01270 368 242.