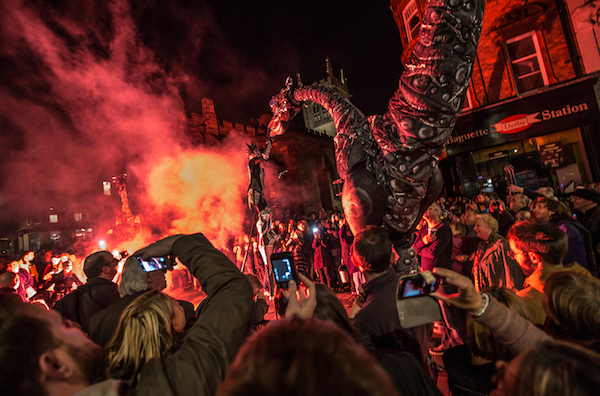 The festival will take over the town centre, transforming the streets and squares with a series of magical and mesmerising performances.

It will be a day of fun for all the family, celebrating Northwich and stretching the imagination with all that is possible.

Visitors can expect surprises at every turn – whether it’s meeting an Urban Astronaut or encountering a Vegetable Nanny.

Music, dance and performances will start at 1pm and continue throughout the day.

Street performers from across the world will be performing alongside Cheshire Dance and the Storyhouse-based Fallen Angels Dance Theatre, who have been leading a community programme that will see over 100 local performers taking part in the event.

The festival will finish with a breath-taking evening performance by Netherlands-based Close-Act Theatre.

They will bring their awe-inspiring show Saurus to the streets of Northwich – billed as showcasing: ‘the biggest beasts that ever walked the earth return to the twenty first century’.

Cllr Louise Gittins, CWAC’s cabinet member for communities and wellbeing, said: “This is going to be such an exciting event for Northwich.

“The word from the organisers is expect the unexpected, in what is hoped will become an annual event.”

The festival has been funded by Arts Council England and Cheshire West and Chester Council.