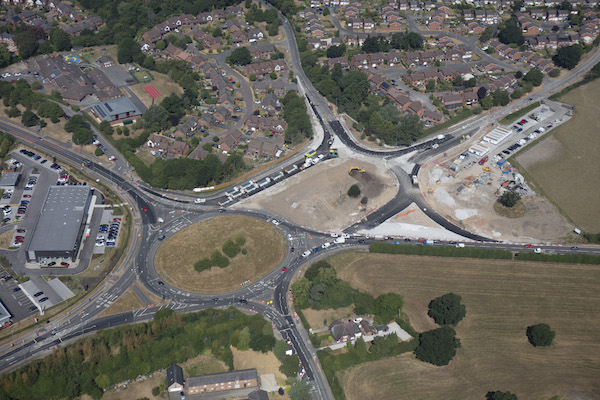 Construction of a new roundabout in Crewe, which it is hoped will ease congestion and remove a traffic pinch-point, is nearing its second major milestone.

Work on Cheshire East Council’s £7m Crewe Green Roundabout scheme began in January and is now at its busiest stage, with construction of the new roundabout and link road junctions progressing as planned.

Towards the end of this month, the scheme will enter its third and final phase which will see the link between the roundabout and Hungerford Road and Sydney Road reopened to motorists.

The new roundabout layout will then be in operation, initially with a single lane of traffic to allow for works to continue.

All lanes will then open towards the end of phase three, with the roundabout expected to be fully open to traffic in November.

Cllr Glen Williams, Cheshire East Council’s deputy cabinet member for highways and infrastructure, said: “Closing the link between the roundabout and Hungerford Road and Sydney Road has allowed for the construction work to be completed much quicker than would otherwise have been possible and we thank residents and motorists for their patience.

“Regular users of Crewe Green Roundabout will have been able to see the scheme progressing at real pace over the last few weeks, with the site visibly changing on an almost daily basis.

“We look forward to entering into the final phase of the scheme and the new roundabout being fully operational in November.”

Funding for the scheme has come from the Local Growth Fund, the National Productivity Investment Fund and developer contributions.

The new road layout will see the existing roundabout become more oval shaped. Traffic lights will be removed and wider junctions created so that traffic can merge from different directions.

Shared cycleways/footways, with crossing points for cyclists and pedestrians, will also be included in the scheme.

Over the past 12 weeks, construction works have included: the installation of street lighting, kerbs and more than 470m of drainage, as well as new pedestrian crossings and footpaths and asphalt surfacing.

Off site, the Crewe Green Roundabout team has delivered educational activities to young people, including a workshop to first-year civil engineering students at Cheshire College – South and West.

The Crewe Green Roundabout scheme is part of a larger programme of investment to deliver growth in Cheshire East.

It builds on earlier highways schemes in Crewe, such as the £26.5m Crewe Green link road and the £7m Basford spine road, as well as improvements to the A500 at Junction 16.