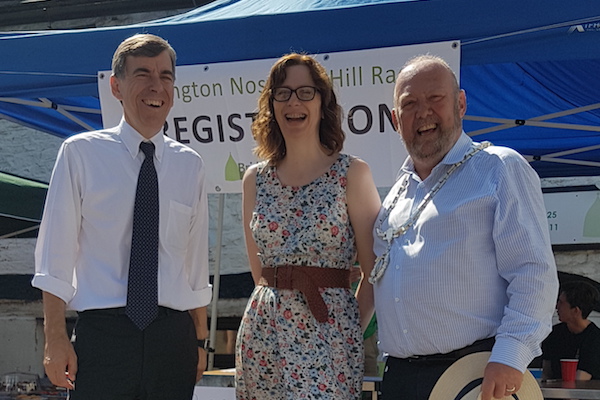 In spite of the hot weather, there was a strong turnout for the race.

David set the seventy runners off on their way over the 7-mile course of mixed terrain, including road, pasture, high moorland and canal towpath, in the beautiful countryside around Bollington.

This was the 14th Bollington Nostalgia Hill Race, and the event continues to go from strength to strength.

It was the first time the race featured the participation of the newly-formed Bollington Harriers running club, set up by the former mayor of Bollington, Cllr Andrew Langdon, who also took part in the race.

The race is organised by the Bridgend Centre, and raises funds for the centre whilst also being a fun day for people to get outdoors and experience the mental and physical health benefits of fell-running.

These, and other funds, support the Bridgend Centre’s work to reach out to those in and around the Bollington community who are feeling isolated or in need of improving their mental wellbeing.

As the centre’s patron, Mr Rutley is a strong supporter of its important endeavours.

Speaking after the event, David said: “I was delighted to once again set the runners off for the Bollington Nostalgia Hill Race.

“It was great to see the race remains as popular as ever, and I am grateful to everyone who took part for helping to raise funds for the vital work of the Bridgend Centre in supporting vulnerable people in our local communities.”