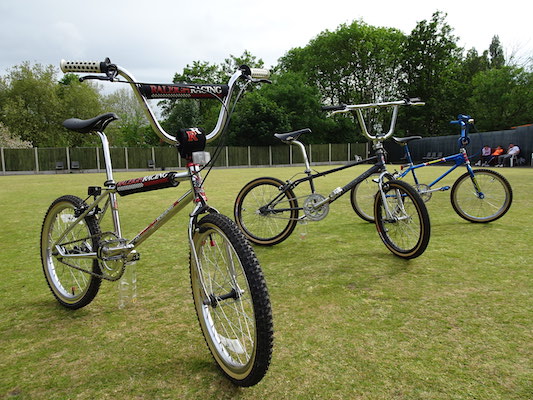 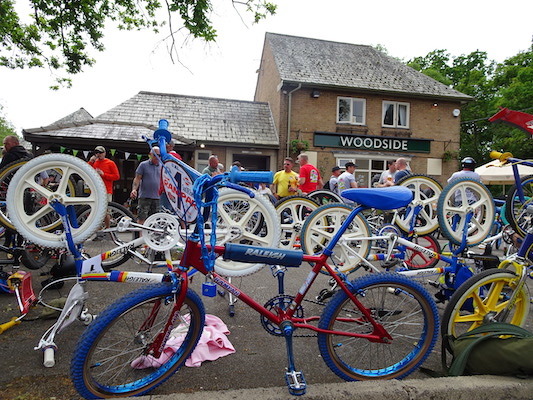 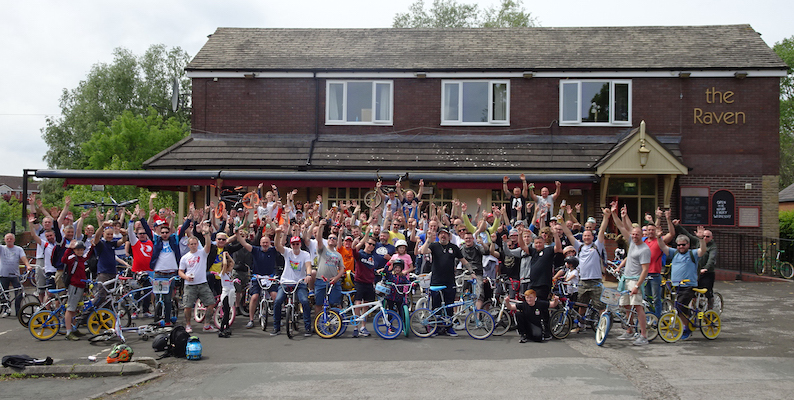 Old school BMX bike fans from around the United Kingdom converged on Crewe on Saturday 25th May 2019 for a social ride in and around the town.

Participants rode from the station to The Brocklebank on Weston Road for breakfast and stopped for liquid refreshment at The Raven Inn (Brookhouse Drive), The Woodside (Valley Road, Wistaston) and The Rising Sun Inn (Middlewich Road, Wistaston).

Participants then followed the Crewe-Nantwich Greenway cycleway to Tipkinder Park for the Platform 1 skatepark and the Shanaze Reade BMX track to show off their impressive BMX skills and for a children’s BMX race.

The ride finished in the afternoon at The Hop Hole on Wistaston Road in Crewe with BMX-themed trophies and prizes presented to the children’s race winner and best bike winners, along with a free prize raffle and a free buffet meal.

Those taking part rode racing and freestyle vintage BMX bikes from the 1980s as well as modern BMX bikes.

The size of bikes ranged from a child’s 12-inch wheeler to a 29-inch wheel cruiser.

There was also a Haro 2018 Master Flatland limited edition frameset owned by Julian Mortin from Halifax, with the frame geometry setup specifically for flatland tricks.

Stickers containing the logo were given to each BMXer and tshirts were also available.

Mark said: “I wanted to capture the retro 80s vibe.

“I started with pencil sketches on paper, then I scanned the design onto my Mac computer and used Adobe Illustrator with the sketch as my template to produce the logo and colour it up.”

The event was open to all, and bikers ranged in age from children to adults.

There were participants from Crewe along with visitors from further afield including Congleton, Macclesfield, Telford, Preston, Blackpool, Oxford, Peterborough, London and North Wales.

Crewe and Cheshire Old School Ride Out was once again organised by John Collins from Crewe, who this year rode a baby blue colour ‘Collins Customs’ 1981 BMX bike.

John said: “We had a record turnout of 145 this year and exceeded over one hundred participants for the first time.

“Our first-ever ride in 2016 had seventeen riders, so we are ecstatic with the response to this year’s event.”

He added: “It was great to see such a wide range of BMX bikes.

“I hope everyone enjoyed the ride and chat. We are always looking for new members, so please get in touch and join us at our next event.”