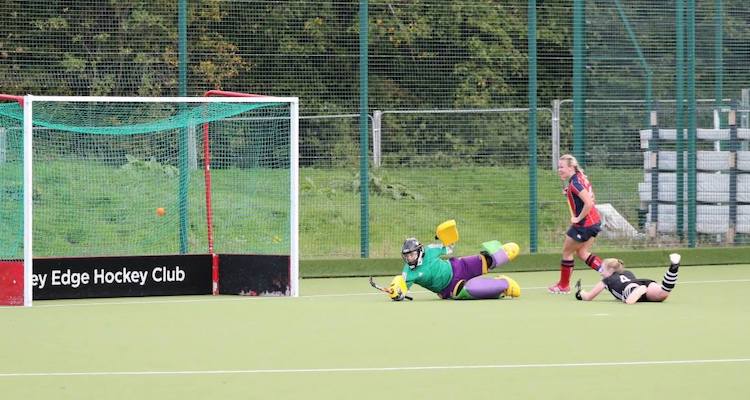 Both AEHC Ladies and Mens 1st XIs faced off against opposition from Sheffield Hallam this weekend.

The Ladies’ 1s entertained Sheffield Hallam at the Edge on Saturday afternoon and duly dispatched them back over the Pennines, 0-4 losers.

After a frustrating first half, in which Edge had all the play but were repeatedly thwarted by Hallam’s goalkeeper, they kept their cool and their sustained pressure eventually paid off in the second half – and then some.

Issy Reynolds-Duffy set the ball rolling after the break with a sneaky rebound off the keeper.

This set the mood for the rest of the half and Edge were unstoppable, playing with a level of pressure and intensity that Sheffield simply couldn’t match.

Their next goals came from player of the match Liv Moores and Amanda Bennison who both scored from spectacular dive deflections, Bennison flooring Hallam’s keeper in the process.

Edge’s final goal came from Caitlin Polley who fired the ball into the corner of Sheffield’s goal from the top of the ‘D’ following a great period of open play from the team.

The ladies head to Neston next weekend, hoping to make it three wins in a row in the North Premier League.

Hallam got their revenge the following day though, their Men’s 1st XII narrowly beating Edge’s  Men 2-1 in their closely-fought North Conference match.

Edge started strongly, with a good attempt on goal from McCormick saved by the Sheffield keeper before another excellent attack down the left by Billy Hedley led to a cross being put away neatly on the far post by Ben Gregory after six minutes.

Another slick attack from Edge should have put them two up but James Warburton failed to convert.

Unfortunately, a quick attack from a midfield turnover then saw Sheffield equalise from a long pass drilled into the ‘D’.

Next Sunday sees Edge’s first home match of the season: a tough local derby against Bowdon at 2pm. (Spectators more than welcome!)

Three games without loss win sees the Men’s 2s top of North League Division 2, a position they fully intend to hold on to for the rest of the season.

They welcomed a strong Liverpool University side to the Edge and started the better side, building well out of the back with Charles Barnes and Andrew Wood dropping nicely into the midfield pockets to marshal play.

Stelios Piperakis then made it 2-0 to Edge following some great work from Jack Smith and Barney Wright down the left flank.

All appeared plain sailing for Edge for a while until a controversial umpiring decision resulted in a penalty flick to Liverpool which they converted.

Confusion reigned for a while but Edge stayed strong and wrapped things up with a flowing move and a tap in for Joe Coxon making the final score 3-1.

The Ladies’ 2s had a tougher away fixture going down 0-3 to North Division 2 leaders Oldham 1s.