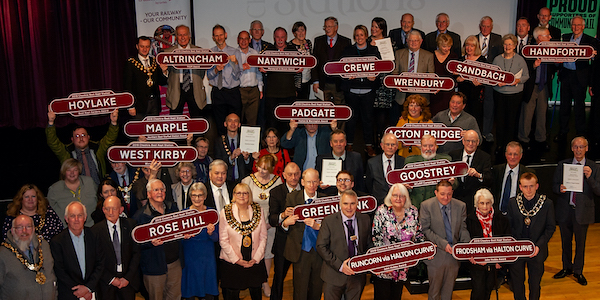 Sixteen stations in the former county of Cheshire have scooped awards at the 17th Cheshire Best Kept Stations awards evening held on Tuesday 28th January 2020, and there were a further five commendations made.

The evening was attended by Lord Lieutenant of Cheshire David Briggs as well as 17 mayors from boroughs, town and parishes across Cheshire.

The awards were presented before 170 guests at The Grange Theatre, Hartford, by Mr Kulvinder Bassi, community rail team leader from the Department of Transport.

David Briggs concluded the evening by praising the station volunteers across Cheshire who dedicate considerable time to the county and were an inspiration to all.

On presenting the awards, Mr Bassi said: “It has been a real privilege for me to present these awards which recognises the outstanding volunteer efforts of so many.

“Through their selfless efforts they have helped transform Cheshire’s railway stations, making them such welcoming gateways across the county. My thanks go to you all”

On announcing the Awards, Mark Barker, chair of Cheshire Best Kept Stations said: “Tonight’s awards evening is a celebration and a thank you for all the volunteers and community groups who do so much to brighten up our stations in Cheshire.

“You are all winners! – whether or not you pick up an award tonight, this is a big thank you to you all;  a party for volunteers and for those who support and encourage you; rail industry, civic leaders and local authorities.”

He added: “We can celebrate something to be truly proud of at so many of our Cheshire stations.

“We have seen some truly excellent work from volunteers and staff at stations right across Cheshire.”

Chair of the Friends of Rose Hill Station (FoRHS), Rachel Singer, commented: “We are delighted that our station has been named the Best Kept Station in Cheshire 2019.

“Our warmest thanks go to Cheshire Best Kept Stations for this recognition of our efforts.

“We must acknowledge the efforts and support from all the volunteers and organisations in Marple, along with Northern, TfGM and all those in community rail who have helped us achieve this prestigious award.”

“Once again, we are proud of the Friends of Rose Hill Station’s continuing success.”

Rose Hill Station in Marple, Stockport won the coveted top “Best Kept Station Award” – the first time the top award has gone to a station in the metropolitan area of the former county.

Other awards and commendations

Further details can be found at bestkeptstations.org.uk.