Record 3 million vines planted in England and Wales this year 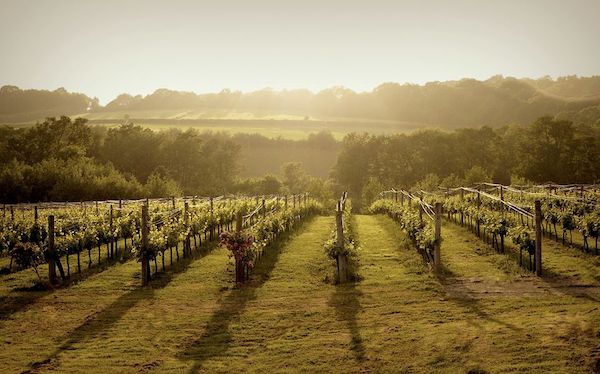 The UK is proving to be one of the fastest-expanding wine regions in the world, following the biggest vine-planting year on record.

That equates to almost an additional 700 hectares of vineyards and a 24% increase in the overall land now under vine.

This is nearly double the number planted last year (1.6 million vines) and treble the 1 million vines planted in 2017, also making the wine industry one of the fastest-growing agricultural sectors in the UK.

Whilst much of the planting has taken place in counties of the South East of England (Kent, Sussex and Hampshire) the spread of vines also includes Gloucestershire, Northamptonshire, Devon, Somerset, Suffolk, Norfolk, Essex and Wales.

“This impressive figure of 3m vines represents another milestone in the growth of our fantastic industry,” comments Simon Robinson, chair of WineGB.

“Last year we set out our vision that in the next 20 years, at the rate of current growth, we could be producing some 40 million bottles per year. We’re certainly heading towards that. This is a thriving British industry.”

Food minister, and Macclesfield MP, David Rutley said: “Our wine makers are innovative, creative and determined, so it’s no surprise that we are seeing the fruits of their labour now shining on the world stage.”

The phenomenal growth figures come off the back of the UK’s most successful vintage last year, following the hot summer and harvest of 2018 which yielded over 15 million bottles, smashing the production figure which, up until then, averaged at just over 5 million bottles.

Local wine school owner Richard Smith works closely with WineGB and will be presenting both English and Welsh wines at the RHS Flower Show Tatton Park in July for the fourth consecutive year.

He commented: “We are in a unique position in Cheshire in that our nearest vineyards are so much nearer than most might think.

“Just an hour from Chester is the award-winning Gwinllan Conwy (Conwy Vineyard) run by our great friends Colin and Charlotte Bennett – their Solaris white still and sparkling wines are simply amazing as are their vineyard tours!”

He added: “In Staffordshire there’s Half Penny Green which is one of the largest wineries in the north of the UK and in Derbyshire there’s Amber Valley where Barry Lewis (former chair of the UK Vintners Association) has some really cracking wines.

“You can even find them in the Chatsworth Farm Shop and in Shropshire there’s Ludlow Vineyard in Craven Arms.”

Whilst it will take three years for grapes from the vines planted over the past three months to reach suitability for production, Richard says he is excited about the industry’s future.

“Some of our finest wines are being exported to the USA and Japan and even France,” he explained.

“Yes, our premium ‘House’ fizz by The Gusbourne Estate is now being supplied into France and many of our sparkling wines are beating the established Champagne houses in the world’s most highly regarded wine awards competitions.”

Richard added: “Our own event this week, aptly named The Great British Grape Off (a nod to our close proximity to the Welsh border and featuring wines from both England and Wales) has been sold out for some time but there’s so much to see around the country.”

Another reason for celebration is the recent raft of noteworthy successes achieved by English and Welsh wines in the major international competitions.

English Wine Week and Welsh Wine Week is a national campaign run by the UK wine industry to put the spotlight on the wines and vineyards of England and Wales.

During the week, promotions and activities take place across the country – these include special in store tastings, winemaker dinners, sales offers, cellar door promotions, wines by the glass and tours with tastings at the vineyards themselves.