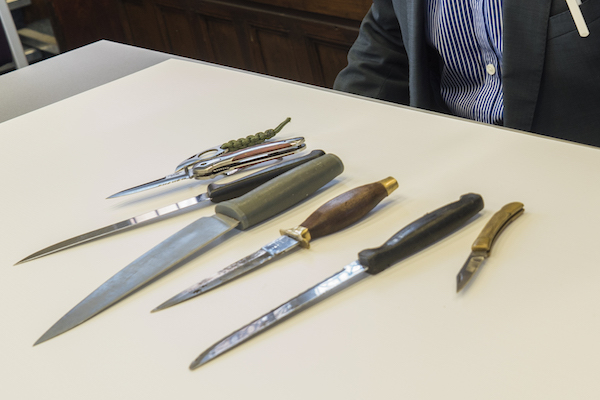 The constabulary took part in the national campaign, Operation Sceptre, which saw officers target people who carry and use knives.

Knife surrender bins were placed at police stations and recycling centres in Ellesmere Port, Macclesfield, Runcorn and Widnes – with 50 knives and one BB gun handed in over the course of the week.

There were a variety of knives handed to police, ranging from standard kitchen knives to dangerous weapons, such as samurai swords.

David Keane, said: “The results from this campaign have been very encouraging. It’s fantastic that the constabulary has managed to take 50 more dangerous weapons off the streets.

“This is testament to officers targeting their activity in areas across Cheshire which see the highest incidences of knife crime.

“Thankfully, Cheshire doesn’t have a large knife crime problem. But as we have seen all too often in cases across the country, if people carry a knife, a minor dispute can soon become a devastating incident.”

As part of the operation, the constabulary worked with partner agencies, such as trading standards, to speak to shop owners about the Challenge 25 campaign to stop the sale of knives to under 18s.

Officers also went into schools across Cheshire to talk to pupils about the dangers of carrying these weapons.

Cheshire Constabulary is working to eradicate this crime and is partnering with Crimestoppers, an independent charity that encourages anyone with information to contact them anonymously on 0800 555 111.