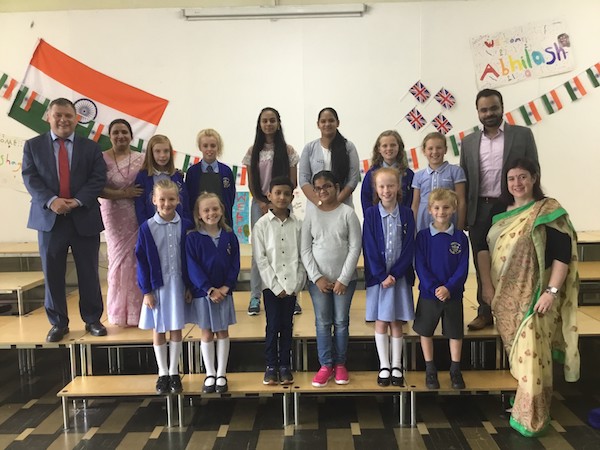 A school in Frodsham was able to welcome visitors from India recently after their local MP stepped in to help get visas sorted following a last minute hitch.

The long-planned visit looked to be in doubt only a few days before the MPs intervention, due to delays with the Indian visitors’ visa applications, but after Mike Amesbury stepped in the visas were arranged in time and the visitors were able to enter the country.

Mr Amesbury commented: “It was a pleasure to help and when the school then invited me along to meet their guests I was absolutely delighted to attend.”

He explained: “Visits like this give children the chance to learn about other cultures and really expand their horizons, as well as help schools maintain ongoing international relationships – which in today’s world are very important.”

Assistant headteacher at the Frodsham school, Naomi Anstice said preparing their pupils to be ‘global citizens’ was one of the school’s top priorities.

She said: “Frodsham Manor House have been working in partnership with Red Roses School for the past four years in order to enhance our provision for global learning and to develop projects in Religious education.

“Last November, Ian Devereux-Roberts (head) and myself visited Red Roses for the first time as part of a research project on Global Learning in RE through the Farmington Institute, Oxford.

“It was here that the plans were made for the children to visit.”

She added: “We were delighted that four Indian families decided to fund their children to travel to spend the week with us.

“The four children aged 10-14 are staying with host families for the week accompanied by Mrs Ritu Bedhi and Mr Surya Behdi.

“During the week they have spent time with classes, joined in with lessons, visited Chirk Castle, played at Colwyn Bay beach, taken part in a business and enterprise conference, visited Helsby High School, Chester Zoo and a quick trip to see the main London landmarks.”