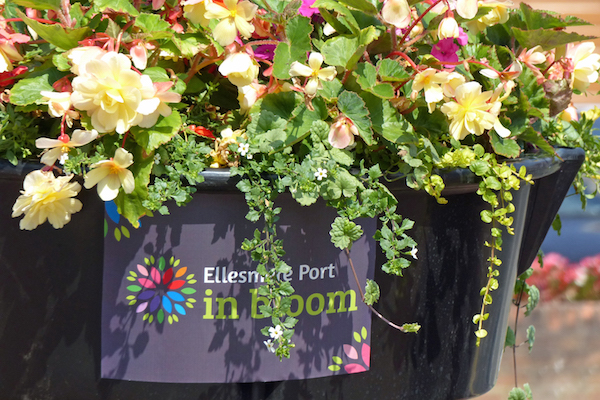 Ellesmere Port locals are being invited to get behind the town’s Britain in Bloom bid this year.

In 2018 the town entered into the ‘It’s Your Neighbourhood” category of the North West in Bloom competition for the first time, and achieved a ‘Level 4 – Thriving’ award (just one level down from the very top accolade).

The non-competitive category was the town’s first steps towards a full entry into the RHS’ annual horticultural competition.

North West in Bloom is the regional organisation which administers the Britain in Bloom competition across Cheshire, Greater Manchester, Lancashire and Merseyside.

Schools, community groups, residents, businesses, allotments and parish councils are now all being invited to take part in this year’s bid for green-fingered glory in Ellesmere Port.

The Ellesmere Port in Bloom entry will be put together by a committee which will be formed shortly by interested parties.

Groups participating in the campaign are asked to focus on its three key themes of: horticultural excellence, community involvement and environmental friendliness.

Cllr Karen Shore explained: “You don’t have to be a Monty Don or have a huge green space to work with – it’s all about enthusiasm for doing your bit for Ellesmere Port in Bloom.

“Last year’s entry was a big success and showcased what wonderful results were being achieved.

Cllr Shore added: “It’s all about bringing members of the community together to make a positive change to the place they live, work, or spend their leisure time.”

Nigel Mountford, Mission Development Officer at Trinity Methodist Church said: “The North West In Bloom initiative is certainly something that Trinity supports and we look forward to working with others to continue the ongoing work that has already been established in the various green spaces around Trinity.

“I would really encourage members of the community to get involved and be part of a process that is certainly uplifting, provides obvious health benefits, and equally provides so much encouragement along the way.”

If you would like to get involved, please email the Ellesmere Port localities team via: EllesmerePortLocality@cheshirewestandchester.gov.uk.